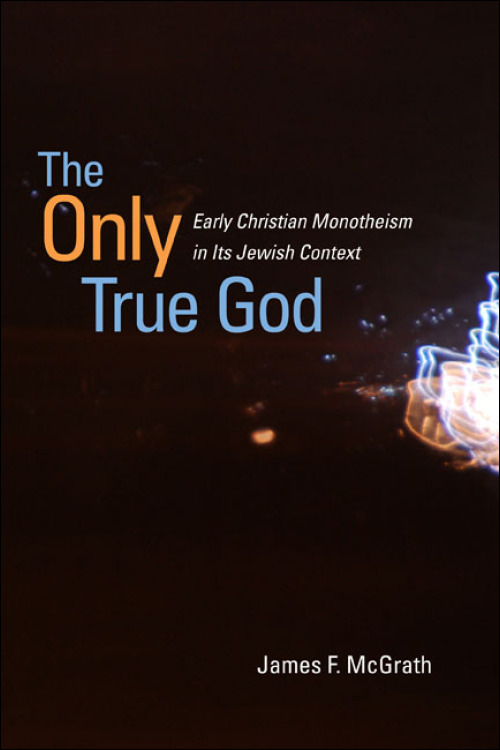 The Only True God

Monotheism is a powerful religious concept shaped by competing ideas and the problems they raised. Surveying New Testament writings and Jewish sources from before and after the rise of Christianity, James F. McGrath argues that even the most developed Christologies in the New Testament fit within the context of first century Jewish monotheism. McGrath pinpoints when the parting of ways took place over the issue of God's oneness, and explores philosophical ideas such as "creation out of nothing" which caused Jews and Christians to develop differing concepts and definitions about God.

James F. McGrath is Clarence L. Goodwin Chair in New Testament Language and Literature at Butler University. He is the author of John's Apologetic Christology: Legitimation and Development in Johannine Christology and The Burial of Jesus: History and Faith.

“Sheds new light on the date and reasons for the division between Jewish and Christian monotheism. . . . Recommended.”--Choice

"An important corrective to the view that tends to interpret New Testament Christology in terms of Nicaea and later developments, thereby missing the Jewish intertextual and hermeneutical keys to interpreting many New Testament texts."--Review of Biblical Literature

"Provocative and valuable."--Journal of Ecumenical Studies

"A provocative challenge to the 'Early High Christology Club.'"--Journal for the Study of the New Testament

"This work puts forward a compelling thesis, questioning the default assumption that what separated first-century Jews and Christians was the Christian elevation of Jesus of Nazareth to divine status as equal with YHWH. McGrath shows decisively that this was not so, arguing with clarity and force and engaging the relevant bodies of primary and secondary literature with precision. A significant and useful book."--Paul J. Griffiths, author of Lying: An Augustinian Theology of Duplicity

"If anyone thinks that the concept and definition of 'monotheism' are clear-cut, they need to read this book. Similarly, if you think that the issue of 'early Christian monotheism' or the question of Jesus's status within or in relation to 'early Christian monotheism' (as maintained by the writers of the New Testament) can be neatly resolved in straightforward terms, then McGrath will enable you to make a more informed judgment, and hopefully to reach a more mature view."--James D. G. Dunn, author of Christology in the Making: A New Testament Inquiry Into the Origins of the Doctrine of the Incarnation

The Only True God blog.Visit the author's blog.Listen to a podcast featuring James F. McGrath.