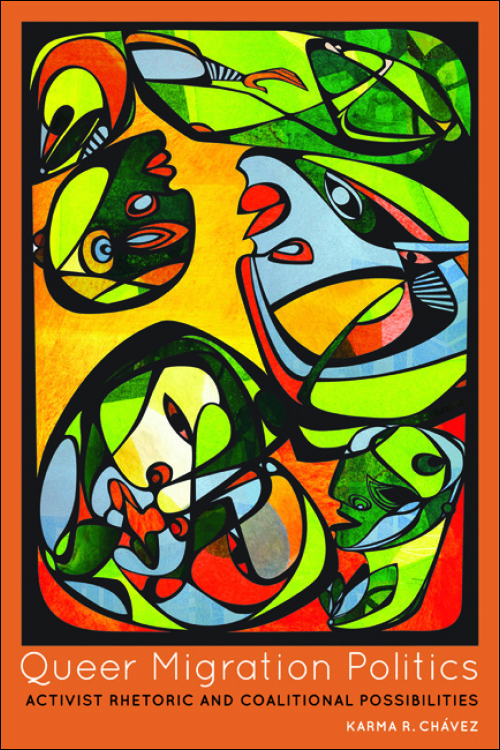 The battles for LGBTQ rights and immigrant rights have captured significant attention in the U.S. public sphere throughout the twenty-first century. Both movements, which are largely understood to be separate, have advocated a politics of inclusion in and assimilation to mainstream national values. Delineating an alternative approach to activism at the intersection of queer rights, immigration rights, and social justice, Queer Migration Politics examines a series of "coalitional moments" in which contemporary activists discover and respond to the predominant rhetoric, imagery, and ideologies that signal a sense of national identity.

Karma R. Chávez analyzes how activists use coalition to articulate the shared concerns of queer politics and migration politics, as activists imagine their ability to belong in various communities and spaces, their relationships to state and regional politics, and their relationships to other people whose lives might be very different from their own. Advocating a politics of the present and drawing from women of color and queer of color theory, this book contends that coalition enables a vital understanding of how queerness and immigration, citizenship and belonging, and inclusion and exclusion are linked. Queer Migration Politics offers activists, queer scholars, feminists, and immigration scholars productive tools for theorizing political efficacy.

Karma R. Chávez is an assistant professor of Communication Arts and Chican@ and Latin@ Studies at University of Wisconsin-Madison. She is the cofounder of the Queer Migration Research Network and the coeditor of Standing in the Intersection: Feminist Voices, Feminist Practices in Communication Studies.

"This is the sphere of academic work, but Chávez goes beyond that, calling for theorization that privileges the experiences of those walking the streets and putting their bodies on the line."--make/shift

"Offers extensive insight into the intersectional aspects and coalitions of queer migrants. . . . This book is an excellent contribution to the study of rhetoric, social movements, queer rights, and immigration politics."--QED

"With little existing scholarship on coalition building across social movement groups, Chavez provides qualitatively supported evidence for coalitional possibilities at the U.S.-Mexico border. Chavez's research differs from other lesbian, gay, bisexual, transgender, and queer/question (LGBTQ) and social movement scholarship as it explores uncharted terrain in the collaboration of activist groups while paying particular attention to intersectionality when analyzing the experiences of individuals who are marginalized by virtue of their nationality as well as their sexual orientation. An inspiring read for anyone with an interest in contemporary equality discourses."--Women's Studies in Communication

"This study provides the reader a lens to see the triangular relationship between multiple oppression (or discrimination), coalition, and radical change. A clear illustration of the latest queer migration politics in the US sociopolitical world."--Gender, Place and Culture

"A highly original contribution and is easily one of the most thoughtful books in queer studies I have read in a long time. Chavez's focus on rhetoric provides a unique lens through which to examine how queers, migrants, and queer migrants are intervening in their differential marginalization vis-a-vis nation-states, neoliberal political economy, and presumptions of citizenship as the telos of belonging. By the end of Queer Migration Politics, readers are left with the question of the extent to which queer migrant coalitional politics will expand and transform normative, nation-based LGBTQ and migrant politics."--GLQ: A Journal of Lesbian and Gay Studies