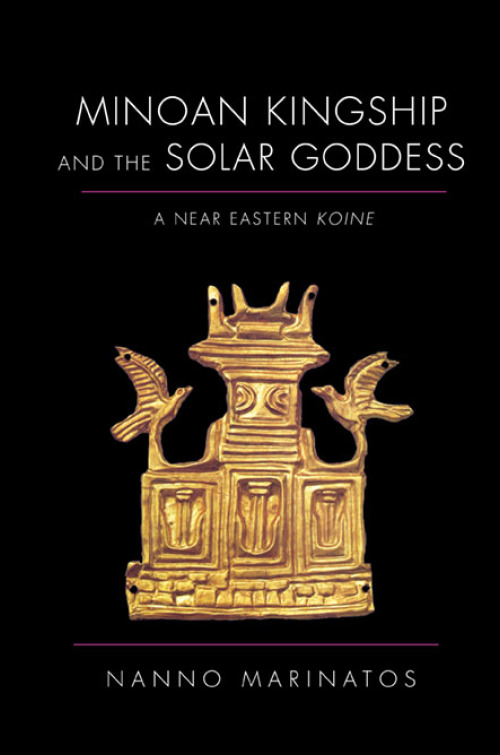 Ancient Minoan culture has been typically viewed as an ancestor of classical Greek civilization, but this book shows that Minoan Crete was on the periphery of a powerfully dynamic cultural interchange with its neighbors. Rather than viewing Crete as the autochthonous ancestor of Greece's glory, Nanno Marinatos considers ancient Crete in the context of its powerful competitors to the east and south. Analyzing the symbols of the Minoan theocratic system and their similarities to those of Syria, Anatolia, and Egypt, Marinatos unlocks many Minoan visual riddles and establishes what she calls a "cultural koine," or standard set of cultural assumptions, that circulated throughout the Near East and the eastern Mediterranean at the time Minoan civilization reached its peak. With more than 150 illustrations, Minoan Kingship and the Solar Goddess delivers a comprehensive reading of Minoan art as a system of thought.

Nanno Marinatos is a professor and the department head of classics at the University of Illinois at Chicago, and the author of Minoan Religion: Ritual, Image, and Symbol; The Goddess and the Warrior: The Naked Goddess and Mistress of Animals in Early Greek Religion; and other books.

"A well-written and richly informed work, which forcefully reasserts the validity of the ways eminent scholars, going back to the early work of Sir Arthur Evans more than a century ago, thought. In many ways it is a tour de force of scholarship, embodying new insights and illuminating points of detail."--Times Literary Supplement, Colin Renfrew

"An exhilarating book, breezily written with a hands-on approach to the material."--Journal of Ancient Egyptian Interconnections

"A multifaceted, innovative work that freshly interprets many aspects of the Minoan religious symbol system. Without a doubt, this book will stimulate extensive scholarly discussion."--Thomas Staubli, coauthor of Body Symbolism in the Bible

"A radical and provocative view of Minoan art, religion, and society. Marinatos provides new readings of numerous Minoan artifacts, offering solutions to many puzzles and placing the imagery within a semantic system of sacral kingship and cosmology."--Kenneth D. S. Lapatin, author of Mysteries of the Snake Goddess: Art, Desire, and the Forging of History