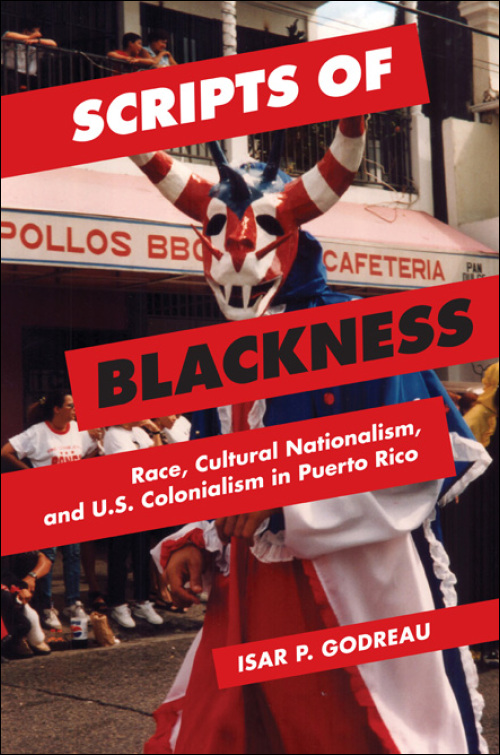 The geopolitical influence of the United States informs the processes of racialization in Puerto Rico, including the construction of black places. In Scripts of Blackness, Isar P. Godreau explores how Puerto Rican national discourses about race--created to overcome U.S. colonial power--simultaneously privilege whiteness, typecast blackness, and silence charges of racism.

Based on an ethnographic study of the barrio of San Anton in the city of Ponce, Scripts of Blackness examines institutional and local representations of blackness as developing from a power-laden process that is inherently selective and political, not neutral or natural. Godreau traces the presumed benevolence or triviality of slavery in Puerto Rico, the favoring of a Spanish colonial whiteness (under a hispanophile discourse), and the insistence on a harmonious race mixture as discourses that thrive on a presumed contrast with the United States that also characterize Puerto Rico as morally superior. In so doing, she outlines the debates, social hierarchies, and colonial discourses that inform the racialization of San Anton and its residents as black.

Mining ethnographic materials and anthropological and historical research, Scripts of Blackness provides powerful insights into the critical political, economic, and historical context behind the strategic deployment of blackness, whiteness, and racial mixture.

Isar P. Godreau is a researcher at and former director of the Institute for Interdisciplinary Research at the University of Puerto Rico at Cayey.

"A strong contribution to the burgeoning literatures on Puerto Rico, race, and nationalism. Highly recommended."--Choice

"Scripts of Blackness: Race, Cultural Nationalism, and U.S. Colonialism in Puerto Rico is a testimony to the importance for anthropology of the longue durée in one place. . . . Godreau's writing flows easily, as she details each thread of her complicated analysis in terms that make the book accessible and of interest to a wide audience."--Journal of Latin American and Caribbean Anthropology

"Scripts of Blackness exposes the complexities derived from the intersections of race, class, and colonialism. This book can be used as a reference or complementary text for both undergraduate- and graduate-level courses. It is a valuable contribution to American, Caribbean, Latino, and Latin American studies, and other related fields."--The Journal of American History

"An invaluable contribution to historical and anthropological understandings of race on the island. . . . A much anticipated resource for Puerto Rican studies scholars, as well as for anthropologists writing on race and nationalism more broadly."--Arlene Dávila, author of Culture Works: Space, Value, and Mobility Across the Neoliberal Americas