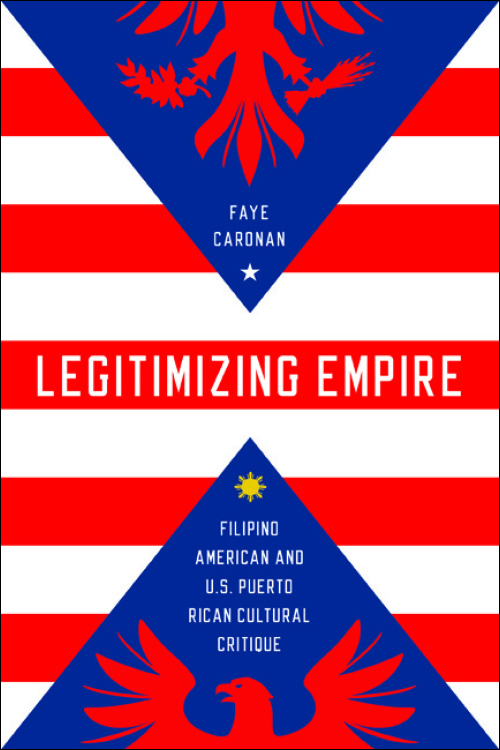 When the United States acquired the Philippines and Puerto Rico, it reconciled its status as an empire with its anticolonial roots by claiming that it would altruistically establish democratic institutions in its new colonies. Ever since, Filipino and Puerto Rican artists have challenged promises of benevolent assimilation, instead portraying U.S. imperialism as both self-interested and unexceptional among empires.

Faye Caronan's examination interprets the pivotal engagement of novels, films, performance poetry, and other cultural productions as both symptoms of and resistance against American military, social, economic, and political incursions. Though the Philippines became an independent nation and Puerto Rico a U.S. commonwealth, both remain subordinate to the United States. Caronan's juxtaposition reveals two different yet simultaneous models of U.S. neocolonial power and contradicts the myth of America as a reluctant empire that only accepts colonies for the benefit of the colonized. Her analysis, meanwhile, demonstrates how popular culture allows for alternative narratives of U.S. imperialism, but also functions to contain those alternatives.

Faye Caronan is an assistant professor of ethnic studies at the University of Colorado Denver.

"[Legitimizing Empire's] successful location of both mainstream American culture and the subcultures examined in the context of historic American imperialism (and ongoing neo-imperialism) is impressive and thought provoking. It very effectively challenges enduring narratives of "benevolent assimilation" in the history of American imperialism, and of multiculturalism as retrospectively justifying such US exceptionalism."--H-Empire

"An ambitious and focused study of resonances between Filipino American and U.S. Puerto Rican cultural critique."--Journal of American History

"Legitimizing Empire offers fresh insights into the continuities and divergences of Philippine and Puerto Rican histories in ways that reveal the seemingly monolithic but uneven deployment of U.S. empire. This work is profoundly instructive both in terms of its illuminating comparative framework which, in itself, approximates so well a non-exceptionalist rendition of U.S. imperial history, but also in its calculated engagement with cultural production as a critique of empire emanating from multiple locations--from the nations/territories themselves and in places where diasporic populations are situated. A great companion to the best books on imperialism and its multiple genres as well as a smart and useful guide to reading contemporary cultural texts that subversively persist in enabling alternative renditions of U.S. multiculturalism."--Rick Bonus, author of Locating Filipino Americans: Ethnicity and the Cultural Politics of Space

"Legitimizing Empire places the Philippine and Puerto Rican cases in dialogue to tell distinct stories about U.S. national history and identity with which these nations are intertwined. A fascinating and wonderfully original archive of Filipino and Puerto Rican performance and activism."--Allan Isaac, author of American Tropics: Articulating Filipino America