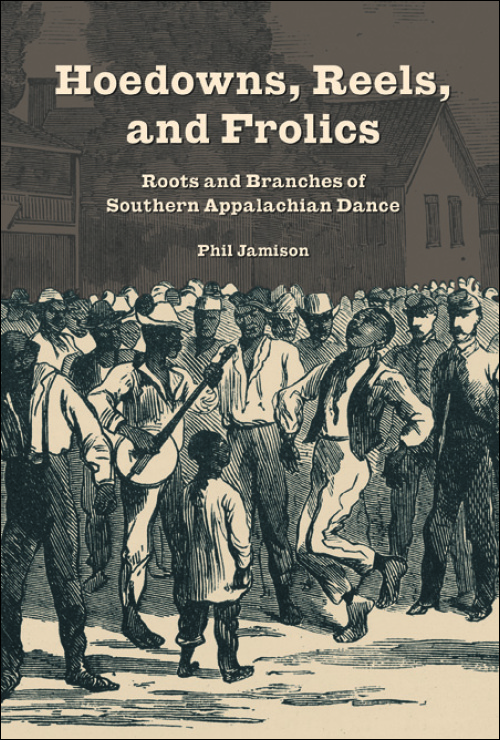 In Hoedowns, Reels, and Frolics, old-time musician and flatfoot dancer Phil Jamison journeys into the past and surveys the present to tell the story behind the square dances, step dances, reels, and other forms of dance practiced in southern Appalachia. He argues that these distinctive folk dances are not the unaltered jigs and reels of the early British settlers, but hybrids that developed over time by adopting and incorporating elements from other popular forms. He traces the forms from their European, African American, and Native American roots to the modern day. From the Shoo-fly Swing to the Virginia Reel, Hoedowns, Reels, and Frolics reinterprets an essential aspect of Appalachian culture.

* Publication of this book was supported by grants from the L. J. and Mary C. Skaggs Folklore Fund and from Warren Wilson College

Phil Jamison is nationally known as a dance caller, old-time musician, and flatfoot dancer. He has called dances, performed, and taught at music festivals and dance events throughout the United States and overseas since the early 1970s, including over thirty years as a member of the Green Grass Cloggers. His flatfoot dancing was featured in the film Songcatcher, for which he also served as Traditional Dance consultant. From 1982 through 2004, he toured and played guitar with Ralph Blizard and the New Southern Ramblers, and he also plays fiddle and banjo. In 2004, he cofounded Dare To Be Square!, a weekend workshop for square dance callers. Jamison teaches mathematics and Appalachian music at Warren Wilson College, where he coordinates the Old-Time Music and Dance Week at the Swannanoa Gathering, and he writes at www.philjamison.com.

"Jamison demonstrates how the history of dance is the story of America: immigration, race, trade, culture, identity, fashion, social stratification, and innovation. The closer you look, the more fascinating it all becomes. . . .This book is about dance, true, but it also provides an analogue for so many other things, reminding us, once again, that few forms of art. . . are ever quite what they seem."--Sing Out!

"No praise is too high for this book. . . . The book is essential for anyone interested in American dance history or southern Appalachian culture."--Country Dance and Song Society News

"This book is meticulously researched, a thorough telling of the story of Appalachian dance, beginning with its European, African-American, and Native-American roots, continuing to modern times. Perhaps because he’s a dancer himself, Jamison writes in a very engaging, reader-friendly manner which scholars and hobbyists alike should appreciate. Highly recommended"--Bluegrass Unlimited

"Phil Jamison has done an admirable job. . . . Hoedowns, Reels, and Frolics is highly informative and entertaining; it would be a worthy addition to the library of any folk dance-- or folk music-- scholar or enthusiast."--Journal of Folklore Research

"A valuable contribution to our deeper understanding of the rich, intricate, and elaborate culture of the Appalachian mountain region of America."--Civil War Book Review

"Jamison's rich opus is seminal. He meets the highest academic standards while remaining accessible and engaging. . . . Hoedowns, Reels, and Frolics represents the standard in the field and sets a high bar for future work."--Journal of American Folklore

"An important addition to the literature. It complicates, in a useful way, a subject that is too often seen as stereotypically artless. And in its emphasis on the foundational role of African American and Native American dance traditions in forms so often seen as essentially white, it is an important antidote to oversimplification."--Journal of Southern History

"A fascinating study of the history and evolution of community square dancing, step dancing, and the variety of other social dances found throughout the southern mountain region."--Western Folklore

"Jamison's approach is careful and considered. . . . Hoedowns, Reels and Frolics is informative, accessible, and a delight to read."--Folklore

"The real complexity of American history is slowly, finally, being uncovered; Phil Jamison shines a beautifully well researched light on the birth of folk dance and music in these United States. He manages to dispel several well-worn myths in the process, and has Native and particularly African-American influences in their rightful place alongside the Anglo in the evolution of our indigenous folk traditions. The true history is far more interesting than the fantasy, and Jamison's thoughtful treatise will have you re-evaluating what you thought you knew about Square Dance--this ain't just a do-si-do in the school gym!"--Rhiannon Giddens, member of the Grammy Award–winning band Carolina Chocolate Drops

"Hoedowns, Reels, and Frolics is an outstanding book on Appalachian dance in all its wondrous variety. It is one of those benchmark books by which we will all measure how our view of a subject has changed. Phil Jamison has examined reams of evidence on dance history, both recent and distant, and the result is a fresh and in many cases astonishing new view of that history. His focus is on the Appalachian forms of group, couple, and solo dancing, but in the process he illuminates the history of American folk dance more broadly. Too often the histories of Appalachian folk music and dance are reduced to oft-repeated truisms about what trait came from where. This book revolutionizes Appalachian dance history, beginning with a careful analysis of the ways in which Cecil Sharp's influential ideas about Appalachian culture have proved mistaken. Most important, Jamison analyzes not only the disparate strands but the evidence in Appalachian dance of new American cultural syntheses that incorporate creative contributions from British and European, African American, and Native American traditions. The roots may be separate strands, but the result is a grand intercultural American creative synthesis."--Alan Jabbour, founding director of the American Folklife Center at the Library of Congress

"For anyone interested in the history of American square dance and clogging, Phil Jamison's book is required (and enjoyable) reading. This is by far the most ambitious and comprehensive work on the subject yet, featuring a wealth of quotations from historical sources that the author has meticulously researched as well as his own extensive firsthand knowledge of the subject. Jamison refutes some long-held myths (for example, that the Appalachian square dance is an ancient and pure form of English country dance) and brings to light heretofore overlooked historical information (such as the significant role of African American dancers, musicians, and callers). Not only does he cover a large number of pertinent subjects (from early 78 rpm recordings of regional callers, to the history of the Virginia Reel, couple dances, and cakewalks), but he presents some pointed criticism of past popularizers. There may even be a few ruffled feathers, but, to me, an important by-product of serious scholarship is to stimulate further discussion and research. Well done, Mr. Jamison!"--Bob Dalsemer, square and contra dance caller and author of West Virginia Square Dances

"Appalachian dancer, dance scholar, and lover of dance Phil Jamison has crafted an artfully written, finely researched, groundbreaking, and comprehensive history of the multiple dance forms known as Appalachian dance. In dispelling myths of Appalachian isolation and whiteness, Jamison describes the transmission of dances through the vibrant commerce that flowed along the Ohio River and its tributaries—the backdoor to Appalachia—linking Pittsburgh to New Orleans and the central and southern Appalachians in between. Grounding his rich and detailed descriptions in a carefully crafted analysis of the ethnic diversity in the Southern backcountry, Jamison details the importance of European, African American, and Native American dance to the Southern square dances, social dances, and step dance traditions, as well as the contemporary dance forms popular in the twenty-first century."--Patricia Beaver, professor emerita, Appalachian State University

"No praise is too high for this book; I’ve been hoping for over half a century that someone would write it, and Jamison has done a superlative job. By drawing on first-person narratives and commercial recordings, he has turned up an astonishing number of printed sources of information on a tradition that was thought to be almost entirely oral. He explodes long-held myths and makes a persuasive case for the multicultural origins of the Southern square dance."--Tony Parkes, author of Contra Dance Calling: A Basic Text

"While those of us with long-standing interest in Appalachian dance have had a sense of the varied elements contributing to its evolution, Jamison's book presents clear proof of the true diversity of influences on this traditional art. The book is accessible, interesting, and enjoyable to read."--Susan Eike Spalding, author of Appalachian Dance: Creativity and Continuity in Six Communities

Author's website includes materials related to the book: audio files of the 78-rpm recordings, links to dance videos, etc. Book's Facebook pageListen to an interview with the author on Radiolab