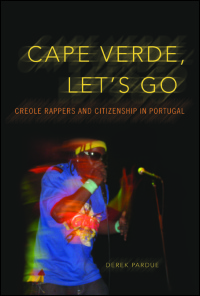 Musicians rapping in kriolu--a hybrid of Portuguese and West African languages spoken in Cape Verde--have recently emerged from Lisbon's periphery. They popularize the struggles with identity and belonging among young people in a Cape Verdean immigrant community that shares not only the kriolu language but its culture and history.

Drawing on fieldwork and archival research in Portugal and Cape Verde, Derek Pardue introduces Lisbon's kriolu rap scene and its role in challenging metropolitan Portuguese identities. Pardue demonstrates that Cape Verde, while relatively small within the Portuguese diaspora, offers valuable lessons about the politics of experience and social agency within a postcolonial context that remains poorly understood. As he argues, knowing more about both Cape Verdeans and the Portuguese invites clearer assessments of the relationship between the experience and policies of migration. That in turn allows us to better gauge citizenship as a balance of individual achievement and cultural ascription.

Deftly shifting from domestic to public spaces and from social media to ethnographic theory, Pardue describes an overlooked phenomenon transforming Portugal, one sure to have parallels in former colonial powers across twenty-first-century Europe.

Derek Pardue is an assistant professor in the Department of Culture and Society at Aarhus University and author of Ideologies of Marginality in Brazilian Hip Hop.

"Cape Verde, Let's Go! is an interesting and worthwhile study of diasporic racial, linguistic, and musical identity. . . . The book's greatest value. . . . is in bringing attention to an area of Europe--and to European colonial system--that is often eclipsed by focus on England, France, and Spain."--Anthropology Review Database

"Cutting edge. While plenty of books have raised issues of cultural practice and citizenship, few--if any--focus on expressive culture. Pardue has already established himself as a scholar of hip-hop, and he brings a depth and richness of experience from his earlier work on Brazil to see the full challenge that Cape Verdean rappers pose not just to Portugal but to Europe and Europeanness."--Marissa Moorman, author of Intonations: A Social History of Music and Nation in Luanda, Angola, from 1945 to Recent Times

"A compelling interdisciplinary study of identity and citizenship among Cape Verdean rappers based in contemporary Lisbon. Building upon his groundbreaking work on Brazilian hip-hop, Pardue shifts his focus across the Atlantic by incorporating nodal points of the Lusophone triangle (Portugal, Cape Verde, and Brazil) that share common histories based on colonialism and slavery, where hybrid cultures have emerged and complex postcolonial entanglements continue to evolve."--Fernando Arenas, author of Utopias of Otherness: Nationhood and Subjectivity in Portugal and Brazil

"A sharp analysis. The author makes an accurate diagnosis of the poetics of production of political-cultural and identity-related statements, revealing a politics of difference radically permeated by the weight of the postcolonial memory and history in the contemporary Cape Verdean and Portuguese contexts."--Víctor Barros, University of Coimbra