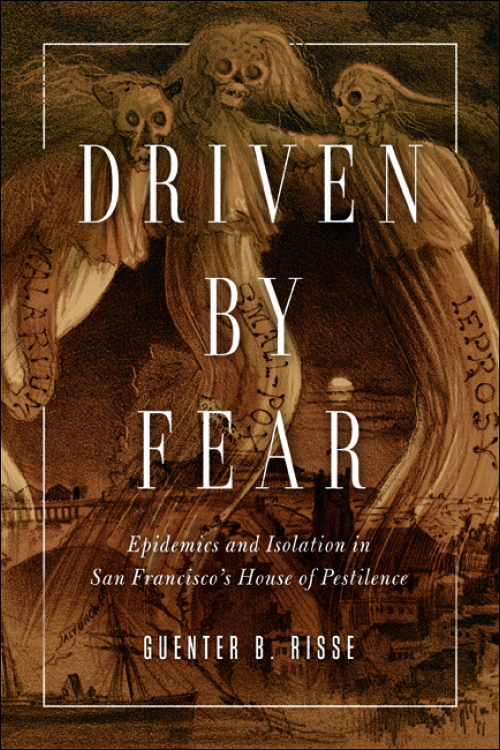 From the late nineteenth century until the 1920s, authorities required San Francisco's Pesthouse to segregate the diseased from the rest of the city. Although the Pesthouse stood out of sight and largely out of mind, it existed at a vital nexus of civic life where issues of medicine, race, class, environment, morality, and citizenship entwined and played out.Guenter B. Risse places this forgotten institution within an emotional climate dominated by widespread public dread and disgust. In Driven by Fear, he analyzes the unique form of stigma generated by San Franciscans. Emotional states like xenophobia and racism played a part. Yet the phenomenon also included competing medical paradigms and unique economic needs that encouraged authorities to protect the city's reputation as a haven of health restoration. As Risse argues, public health history requires an understanding of irrational as well as rational motives. To that end he delves into the spectrum of emotions that drove extreme measures like segregation and isolation and fed psychological, ideological, and pragmatic urges to scapegoat and stereotype victims--particularly Chinese victims--of smallpox, leprosy, plague, and syphilis.

Filling a significant gap in contemporary scholarship, Driven by Fear looks at the past to offer critical lessons for our age of bioterror threats and emerging infectious diseases.

Guenter B. Risse is a professor emeritus of the history of medicine at the University of California, San Francisco. His books include Plague, Fear, and Politics in San Francisco's Chinatown and Mending Bodies, Saving Souls: A History of Hospitals.

"Thoroughly grounding his book in rich primary sources, particularly newspapers (especially the San Francisco Chronicle, and medical sources, Risse provides a model for sound historical research and storytelling, both of considerable use to undergraduates. Far more than an isolated historical account, the work continually relates the historical implications to modern medical culture and practice. Highly recommended."--Choice

"A well-researched study that demonstrates the shortsightedness of governments that focused more on satisfying business interests than on funding adequate health provisions in response to epidemics."--Journal of American History

"Risse makes expert use of the history of the pesthouse to illustrate the dangers of authoritarian public health interventions . . . and makes a persuasive case for community-based, multi-directional responses that conscientiously reckon with the ways in which racial, ethnic, and class disparities frame our understanding of health and risk."--Journal of the History of Medicine and Allied Sciences

"This study of the pesthouse, an institution designed to cope with the fear of contagious disease, is a significant contribution to the history of American medicine and public health as well as the history of immigration and ethnicity."--Journal of American Ethnic History

"This book is valuable for its detailed history of a troubling chapter in medical and public health history. It should be required reading for today's public health policy makers."--Bulletin of the History of Medicine

"Guenter Risse has written a very interesting and well-documented book, one that has a message for contemporary times as well as being an exploration into the history of San Francisco's pest house."--Pacific Historical Review

"A deeply researched, very well-written and timely account by the foremost historian of public health policy in the city by the Golden Gate of how emotions of fear and disgust can war with compassion and rational planning in the shaping of a community’s response to epidemics. Risse has made a major contribution to both San Francisco history and American social history by documenting the tangled racial, ethnic, psychological, ideological, and practical roots of the discourse and practice of activists who worked to protect the city's residents from contagion by smallpox, syphilis, leprosy, and bubonic plague in the early years of the twentieth century. Driven by Fear is an engaging and highly original addition to Western American history and American urban history and a must read for historians and contemporary public health scholars and practitioners."--William Issel, author of Church and State in the City: Catholics and Politics in Twentieth Century San Francisco

"In this startlingly vivid and humane study, Guenter Risse, doyen of hospital historians, sets a lost history in the context of issues of disease prevention, municipal politics, and the history of the emotions. Only by understanding the lived experience of disgust and fear in the past, Risse argues, are we likely to do better in the present and future with stigmatized diseases."--Colin Jones, author of The Smile Revolution in Eighteenth Century Paris

"Using a wonderfully drawn history of San Francisco's Pest House as his primary exhibit, Risse shows us how fear of contagion, if not diluted with compassion and a respect for human dignity, quickly produces harsh, impersonal, and militaristic measures against 'the enemy,' people who disgust us simply because they have, or might have been exposed to, whatever the threatening disease of the day is--smallpox, syphilis, leprosy, plague, or even SARS or Ebola. A must read for anyone interested in protecting the public's health, social justice, and human rights."--George J. Annas, author of Worst Case Bioethics: Death, Disaster, and Public Health

"A true gem from one of our most distinguished historians of medicine. Risse's book is ambitious, original, and even brave. Driven by Fear covers an admirably wide variety of subjects and subdisciplines, and in the process truly breaks new ground in the history of public health. Moreover, Risse's prose consistently helps us feel the past--his is indeed an emotional as well as intellectual achievement."--Robert D. Johnston, editor of The Politics of Healing: Histories of Alternative Medicine in Twentieth-Century North America