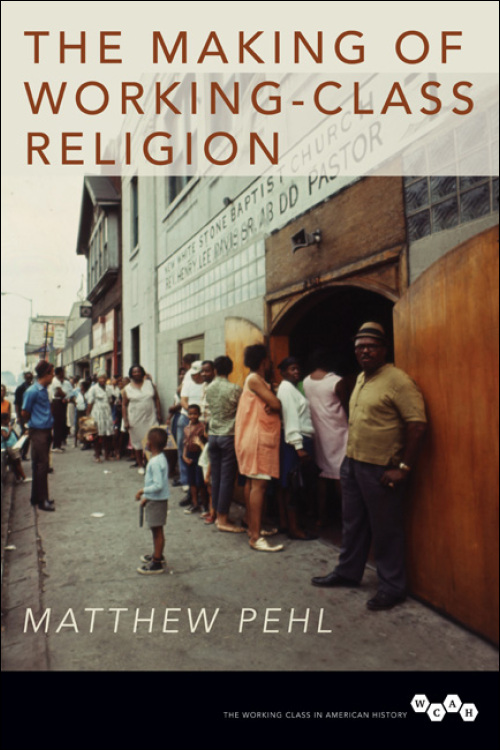 Religion has played a protean role in the lives of America's workers. In this innovative volume, Matthew Pehl focuses on Detroit to examine the religious consciousness constructed by the city's working-class Catholics, African American Protestants, and southern-born white evangelicals and Pentecostals between 1910 and 1969.

Pehl embarks on an integrative view of working-class faith that ranges across boundaries of class, race, denomination, and time. As he shows, workers in the 1910s and 1920s practiced beliefs characterized by emotional expressiveness, alliance with supernatural forces, and incorporation of mass culture's secular diversions into the sacred. That gave way to the more pragmatic class-conscious religion cultures of the New Deal era and, from the late Thirties on, a quilt of secular working-class cultures that coexisted in competitive, though creative, tension. Finally, Pehl shows how the ideology of race eclipsed class in the 1950s and 1960s, and in so doing replaced the class-conscious with the race-conscious in religious cultures throughout the city.

An ambitiously inclusive contribution to a burgeoning field, The Making of Working-Class Religion breaks new ground in the study of solidarity and the sacred in the American heartland.

Matthew Pehl is an associate professor of history at Augustana University.

"This book is well-written, concise, and highly recommended to all audiences."--The Michigan Historical Review

"Pehl's work makes a number of important contributions to our thinking about religion within labor history. . . . He expertly weaves together the thoughts of religious leaders and rank-and-file workers, shows the intersections of these processes among Protestants and Catholics, and African American and white workers."--Journal of American History

"The Making of Working Class Religion is an important read for both scholars of labor and scholars of religion as a methodological model for advancing the study of religion, labor, and class. . . . Pehl's book teaches its readers--whether they be scholars, labor organizers, or graduate or undergraduate students--how to recover and interpret critically and empathetically, the religious worlds of working-class people."--Labour/Le Travail

"The value of Pehl's wonderful book is that it helps us reimagine the currents of faith that ebb and flow in American society and interact with changing political and economic circumstances. This is a book that belongs on the shelves of historians." --American Historical Review

"Matthew Pehl's subtle and stunning book describes the remarkable moments when working class identities and religion remarkably converged in America's quintessential manufacturing city--Detroit--first from the 1920s to the 1940s, then as they fractured amidst the racial, ethnic, gender, and political shifts after World War II. Pehl incisively describes the possibilities and tensions, and achievements and failures, that encouraged and undermined bonds between religion and the working classes in an uneasily complex American city. A terrific achievement and enthralling read."--Jon Butler, author of Awash in a Sea of Faith: Christianizing the American People

"A signal contribution to the resurgence of historical interest in the religious worlds of working class men and women. Pehl shows how 'work' had religious significance in Detroit's working class neighborhoods and in doing so he helps restore the realities and exigencies of daily toil to American religious history. The Making of Working Class Religion is also an exciting religious history of modern Detroit. With its huge cast of historical actors--Detroit's white and black, Protestant and Catholic workers, Elijah Muhammad, Reinhold Niebuhr, Father Charles Coughlin, and many others--the book goes a long way towards establishing the city's importance as a place of religious innovation and public engagement. This is dynamic and powerful history."--Robert Orsi, author of The Madonna of 115th Street: Faith and Community in Italian Harlem, 1880-1950