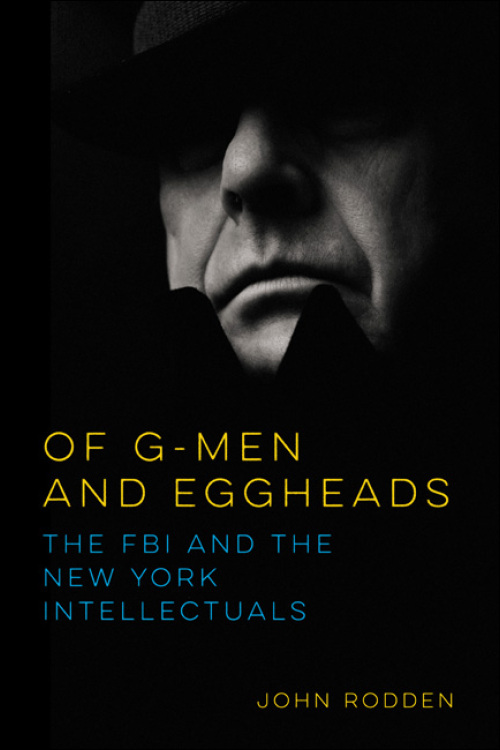 John Rodden cuts this tall tale down to its authentic pint size, refusing to indulge the public relations myth promoted by J. Edgar Hoover's FBI. In Of G-Men and Eggheads, Rodden portrays federal agents’ hilarious obsession with monitoring that ever-present threat to national security, the American literary intellectual. Drawing on government dossiers and archives, Rodden focuses on the onetime members of a radical political sect of ex-Trotskyists (barely numbering a thousand at its height), the so-called New York intellectuals. He describes the nonsensical decades-long pursuit of this group of intellectuals, especially Lionel Trilling, Dwight Macdonald, and Irving Howe. The Keystone Cops style of numerous FBI agents is documented carefully in Rodden's meticulous case studies of how Hoover's men recruited informants to snoop on the "Commies," opened their personal mail, tracked their movements, and reported on their wives and friends.

In a rich and stimulating epilogue, Rodden shows how his Cold War research possesses thought-provoking implications for us today, in our post-9/11 era of debates about data collection, privacy invasion, personal dignity, and the use and abuse of government and corporate power.

"Almost forty-give years since death terminated the reign of FBI director/dictator J. Edgar Hoover, the Bureau's abuses and follies continue to surface. John Rodden has skillfully excavated such concerning the FBI's surveillance of (and often error and/or confusion-ridden files on) three leading so-called New York Intellectuals, all anti-Stalinists with minor past ties with Trotskyist groups, whose sins entirely consisted of their written or oral political views. Rodden, an expert on George Orwell, concludes by aptly warning that the United States is rapidly approaching an Orwellian world of never-ending warfare and ever-increasing governmental surveillance that poses a major threat to the privacy and civil liberties of everyone."--Robert Justin Goldstein, author of Political Repression in Modern America: From 1870 to 1976

"A compelling piece of critical and scholarly work. Much of the evidence Rodden brings forward is surprising, indeed shocking. The work that he has done has significant implications for us today, in our post-9/11 era of intense debate about intelligence gathering, personal freedom, and the use and abuse of political authority and power."--William E. Cain, author of F. O. Matthiessen and the Politics of Criticism