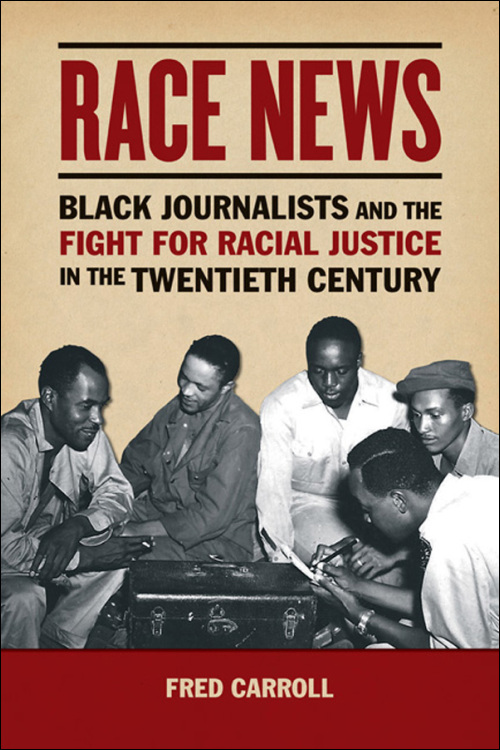 Once distinct, the commercial and alternative black press began to cross over with one another in the 1920s. The porous press culture that emerged shifted the political and economic motivations shaping African American journalism. It also sparked disputes over radical politics that altered news coverage of some of the most momentous events in African American history.

Starting in the 1920s, Fred Carroll traces how mainstream journalists incorporated coverage of the alternative press’s supposedly marginal politics of anticolonialism, anticapitalism, and black separatism into their publications. He follows the narrative into the 1950s, when an alternative press reemerged as commercial publishers curbed progressive journalism in the face of Cold War repression. Yet, as Carroll shows, journalists achieved significant editorial independence, and continued to do so as national newspapers modernized into the 1960s. Alternative writers’ politics seeped into commercial papers via journalists who wrote for both presses and through professional friendships that ignored political boundaries.

Fred Carroll is a lecturer at Kennesaw State University.

"A welcome addition to our understanding of both journalistic and African-American history . . . Race News is highly recommended."--People's World

"[A] wonderful book about the black press in the 21st century. . . . Highly recommended."--Choice

"Carroll offers new insight in examining the ties between 'alternative' and 'commercial' outlets. Race News will also be of value as a comprehensive, readable introduction for those more broadly interested in African American history, journalism history and civil rights activism."--LSE Review of Books

"Race News is an essential and thoughtful exploration of a crucial epoch, blending meticulous research into a compelling narrative. Students will be inspired by stories about long-neglected journalists and publishers, while historians will appreciate the complex portrait of a fulminating struggle at the heart of the African-American experience."--American Journalism

"Fred Carroll has made an important addition to the literature with Race News: Black Journalists and the Fight for Racial Justice in the Twentieth Century."...Carroll's book offers a lot to journalism history classes and mass communication students overall." --Journalism History

"For those interested in black newspapers' complex navigation of the politics of the twentieth century and how those papers ultimately made a difference, Race News is worth a careful read." --The Journal of American History

"A rich and nuanced history of African American journalism in the last century. It is arguably the most thorough and substantive treatment of the subject." --American Historical Review

"Fred Carroll examines the symbiotic yet contentious relationship between commercial and alternative black press in his insightful Race News. . . . This is a well-argued, thoroughly researched and important contribution to African American social history." --Journal of Social History

"An ambitious undertaking, one that covers decades of press data and a large body of scholarship. . . .Carroll captures the arc of his study with a provocative insight: commercial newspapers' 'business model. . . . carried the seeds of its own destruction'." --African American Review

"Race News connects the dots along the line of the black press's development . . . the chapters on the new negro and popular front journalism show how labor and left politics were integral to the black community and interwoven into the popularity of black newspapers and their communication of the political culture of the New Deal." --Labor

"Race News reveals a new perspective that illuminates the ways in which alternative Black journalism informed the editorial practices of the commercial Black press and mainstream news media across the last century. A meticulously researched examination that contributes new insight to scholarship on Black journalism." --Communication Booknotes Quarterly

“A thorough, well-researched, lively, and accessible account of the role of the Black press in the twentieth century. Race News is a sympathetic and politically astute analysis of the paths navigated by black journalists, and the role played by them, in many of the key struggles for racial justice in U.S. history.”--Bill V. Mullen, author of Popular Fronts: Chicago and African American Cultural Politics, 1935-1946

"Unquestionably stimulating and enjoyable. The details about how the alternative black press affected the commercial black press in the 1930s and in the civil rights era is not well known or documented and is quite exciting. Carroll unquestionably adds important nuances to what other scholars have written in telling the history of the black press."--Patrick Washburn, author of The African American Newspaper: Voice of Freedom