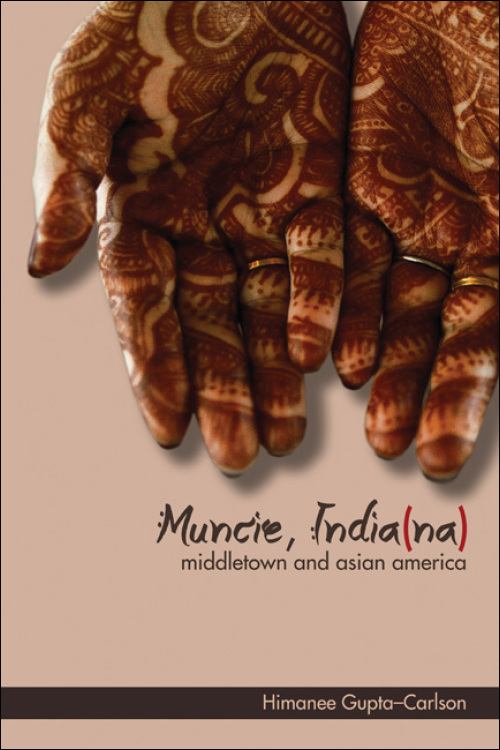 Muncie, Indiana, remains the epitome of an American town. Yet scholars built the image of so-called typical communities across the United States on an illusion. Their decades of studies ignored the racial, ethnic, and religious diversity and tensions woven into the American communities that Muncie supposedly embodied.

Himanee Gupta-Carlson puts forth an essential question: what do nonwhites, non-Christians, and/or non-natives mean when they call themselves American? A daughter in one of Muncie's first Indian American families, Gupta-Carlson merges personal experience, the life histories of others, and critical analysis to explore the answers. Her stories of members of Muncie's South Asian communities unearth the silences imposed by past studies while challenging the body of scholarship in fundamental ways. At the same time, Gupta-Carlson shares personal memories and experiences that illuminate her place within the historical, political, and sociocultural currents she engages in her work. It also reveals how that work informs and transforms her as a scholar and a person.

As meditative as it is insightful, Muncie, India(na) invites readers to feel the truth of the fascinating stories behind one woman's revised portrait of an American community.

"The book is very engaging and well-written; straightforward reporting in a journalistic style and discourse analysis are interwoven with novelistic depictions of the author's personal experiences and interactions with significant others." --Journal of American Culture

"Himanee Gupta-Carlson provides nuanced perspectives on what being an American means to those who immigrated from South Asia and--more important--to the children of these immigrants in Muncie, India(na): Middletown and Asian America." --The AAG Review of Books

"Muncie, India(na): Middletown and Asian America provides a nuanced and multilayered analysis of the experience of Hindu and Muslim immigrants and their children as religious and racial minorities in the U.S.  Weaving together her own life story with ethnographic data, Dr. Gupta-Carlson tells multigenerational stories of immigration and integration in middle America and illustrates how a growing South Asian American community continues to be affected by its interactions with the White, Christian milieu. By drawing on both immigrant and second-generation voices, she gives life to the stories she tells and is also able to illustrate how religion and politics in India continue to inform and shape relationships in South Asian American diaspora in Muncie, Indiana."--Khyati Y. Joshi, coeditor of Asian Americans in Dixie: Race and Migration in the South

"Gupta-Carlson brings a much-needed perspective to Middletown studies. But she also addresses pressing questions about what it means to be an American today. Through careful reflection and analysis, she develops a compelling case for the importance of involved and sustained dialogues that bridge difference."--Luke Eric Lassiter, coauthor of The Other Side of Middletown