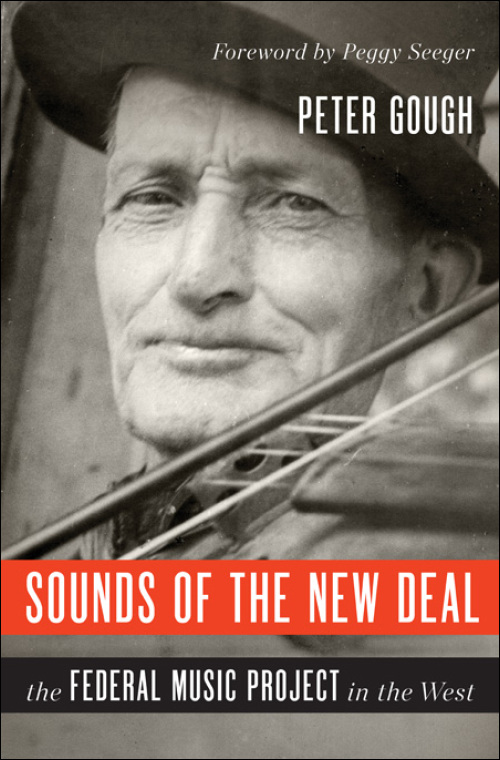 Sounds of the New Deal

At its peak the Federal Music Project (FMP) employed nearly 16,000 people who reached millions of Americans through performances, composing, teaching, and folksong collection and transcription. In Sounds of the New Deal, Peter Gough explores how the FMP's activities in the West shaped a new national appreciation for the diversity of American musical expression.

From the onset, administrators and artists debated whether to represent highbrow, popular, or folk music in FMP activities. Though the administration privileged using "good" music to educate the public, in the West local preferences regularly trumped national priorities and allowed diverse vernacular musics to be heard. African American and Hispanic music found unprecedented popularity while the cultural mosaic illuminated by American folksong exemplified the spirit of the Popular Front movement. These new musical expressions combined the radical sensibilities of an invigorated Left with nationalistic impulses. At the same time, they blended traditional patriotic themes with an awareness of the country's varied ethnic musical heritage and vast--but endangered--store of grassroots music.

Rich with anecdotal detail, Sounds of the New Deal reveals the crossroads of art and politics that still shape America's sense of itself.

* Publication of this book was supported by a grant from the L. J. and Mary C. Skaggs Folklore Fund

Peter Gough is a lecturer in history at California State University, Sacramento.

"In Sounds of the New Deal, historian Peter Gough helps to address a research gap long unwarranted. Gough's monograph is concise but rich in detail. Accessible and at points enlivened with some of the insider drama of personnel and personality, the book will resonate with interdisciplinary readers and specialists. It is fine work on a worthy topic."--Western American Literature

"An interesting and informative book about the WPA's Federal Music Project (FMP) and its influence and effect on the American West. Gough makes good use of sources to weave a passionate and driven narrative."--The Annals of Iowa

"With Sounds of the New Deal, Gough makes an important contribution to scholarship on American music, the New Deal, and the cultural history of the West. His revisionist take on the FMP is persuasively argued in chapters that overflow with colorful anecdotes and details gleaned from primary sources."--New Mexico Historical Review

"For any student of the Great Depression--particularly the new deal--this tome will be a welcome source, reflecting a unique and rich time for American music."--The Journal of Arizona History

"Peter Gough's Sounds of the New Deal significantly adds to the cultural history of the 1930s. . . . Gough's important contribution not only explores the FMP in the West, based on a wide variety of primary and secondary sources, but also includes coverage of numerous musical styles. . . . It is a pleasure to review such an informative study of popular music."--The Journal of American History

"Peter Gough's book traces the origins and development of the Federal Music Project (FMP), one of the least studied of the New Deal's cultural agencies. . . . The sources are impressive. Gough has scoured relevant published secondary literature, dissertations and theses, WPA administrative records, local records, sound recordings, and oral histories. . . . The result is a portrait of the activities of thousands of local FMP participants in the American West."-Western Historical Quarterly

"Title and subtitle work together both metaphorically and literally to indicate how a sharp focus can lead to a study that has broad implications. Looking at The Federal Music Project in the West can give scholars not only a better understanding and appreciation of the work of the Federal Music Project (FMP) but also insights into New Deal/Popular Front culture, western history, and the history of "folk" and "art" music and the United States. All of this should be of great interest to both folklorist and historians."-Journal of Folklore Research

"Gough has produced an informative, useful, and notable work that sheds new light on the New Deal and the little-known FMP. He deserves praise for his efforts."--Journal of the Illinois State Historical Society

"The author's passion for the music of the era and belief in the FMP's successful support for the diverse local music styles of the West is evident throughout the book."--Pacific Northwest Quarterly

"The confluence of musical and historical scholarship in Sounds of the New Deal is in many ways exemplary. . . . Each chapter of this book allows the reader to confront music as historical material in ways both common and uncommon. Gough writes about folk song when many would consider it anachronistic; he reinstates the past in the present, embracing the politics of populism with its positive and negative attributes; he turns to a moment of history when singing and listening to diversity made Americans more alike than different."--H-Music

"Sounds of the New Deal is a must read for anyone interested in 'the cutural mosaic illuminated by American folksong.'" --Federal History

"Reading Gough's book has given me an understanding of that extraordinary decade during which the music of the United States was discovered (much as the Europeans 'discovered' North America). Just as important, I have learned what my parents were doing at that time, for they never told us, literally, what their roles were in the projects."--Peggy Seeger, from the foreword

"This book changes the lens on the New Deal music programs. By taking a long view (1935–43) and a regional focus (eight western states), Gough shows these projects to be more politically left, more culturally diverse, more subject to the influence of women, and more productive of performance treasures than previously suspected."--Christine Bold, author of The Frontier Club

"Sounds of the New Deal is not only an important contribution to the cultural history of the Great Depression, but it promises to transform the way in which historians connect culture with politics when studying the era. Gough's keen attention to intra-agency politics, regional differences, cross-cultural interactions, workplace issues for musicians, and, perhaps most importantly, the role of audiences in all of this gives us a better understanding of just how important federal programs were in shaping and creating the demand for culture in the American West during one of the region's most significant periods of growth. A fantastic book."--Peter La Chapelle, author of Proud to Be an Okie: Cultural Politics, Country Music, and Migration to Southern California

"Sounds of the New Deal sings a new song, revealing the significance of the almost unknown Federal Music Program for the first time. Passionately argued and deeply researched, this book permanently changes our understanding of the greatest cultural movement in American history."--Charles McGovern, author of Sold American: Consumption, and Citizenship, 1890-1945