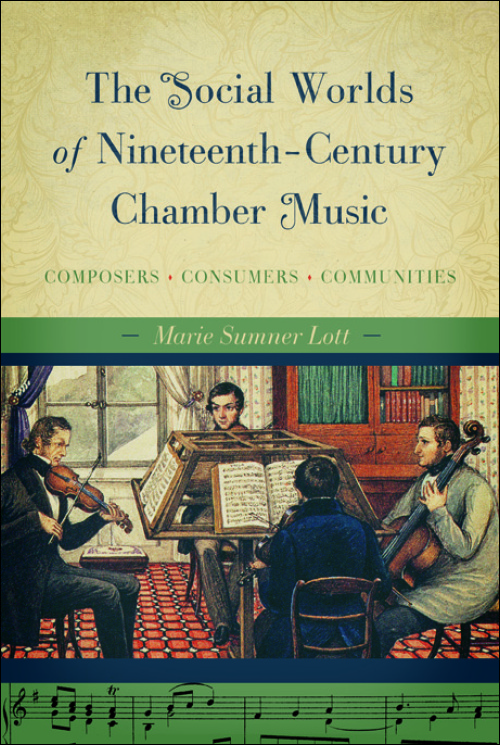 Music played an important role in the social life of nineteenth-century Europe, and music in the home provided a convenient way to entertain and communicate among friends and colleagues. String chamber music, in particular, fostered social interactions that helped build communities within communities.

Marie Sumner Lott examines the music available to musical consumers in the nineteenth century, and what that music tells us about their tastes, priorities, and activities. Her social history of chamber music performance places the works of canonic composers such as Schubert, Brahms, and Dvoøák in relation to lesser-known but influential peers. The book explores the dynamic relationships among the active agents involved in the creation of Romantic music and shows how each influenced the others' choices in a rich, collaborative environment. In addition to documenting the ways companies acquired and marketed sheet music, Sumner Lott reveals how the publication and performance of chamber music differed from that of ephemeral piano and song genres or more monumental orchestral and operatic works. Several distinct niche markets existed within the audience for chamber music, and composers created new musical works for their use and enjoyment.

Insightful and groundbreaking, The Social Worlds of Nineteenth-Century Chamber Music revises prevailing views of middle-class influence on nineteenth-century musical style and presents new methods for interpreting the meanings of musical works for musicians both past and present.

* Publication supported by the AMS 75 PAYS Endowment of the American Musicological Society, funded in part by the National Endowment for the Humanities and the Andrew W. Mellon Foundation

Marie Sumner Lott is an associate professor of music history and literature at Georgia State University and a winner of a 2013 ASCAP-Deems Taylor award.

"This book is an extremely significant achievement. It is likely to attract the interest of a broader readership and is strongly recommended, both as a resource for students and more seasoned scholars. It is all too rare that one encounters a book that engages one's avid interest throughout: this was one of those books."--Ad Parnassum

"By focusing on the milieu of middle-class amateurs rather than the professional world of the concert hall that has occupied most scholars, Lott provides a fresh perspective on the production and consumption of chamber music in nineteenth-century Europe. The Social Worlds of Nineteenth-Century Chamber Music is an exemplary contextual study that enhances our appreciation of not only canonic masterworks but also lesser-known pieces written for this thriving market."--Walter Frisch, author of Music in the Nineteenth Century

"By considering nineteenth-century chamber music as a practice that involved not only composition but also production, marketing, and both amateur and professional performance, Marie Sumner Lott provides a fascinating and valuable new perspective on both familiar and unfamiliar music. Anyone with a serious interest in chamber music for strings--or indeed nineteenth-century European musical practice--will enjoy and learn from The Social Worlds of Nineteenth-Century Chamber Music."--David Gramit, author of Cultivating Music: The Aspirations, Interests, and Limits of German Musical Culture, 1770-1848

"Sumner Lott's book is well organized and easy to read, and it contains many fresh insights into nineteenth-century string chamber music."--Christina Bashford, author of The Pursuit of High Culture: John Ella and Chamber Music in Victorian London

"An imaginative excursion into the practical world of chamber music in the nineteenth century. Marie Sumner Lott exposes us to new repertories, which will interest string players. For musicologists and historians she proposes alternative historiographies that take composers' awareness of different audiences and expanded ideas about progressivism into account."--Mary Hunter, author of The Culture of Opera Buffa in Mozart's Vienna: A Poetics of Entertainment