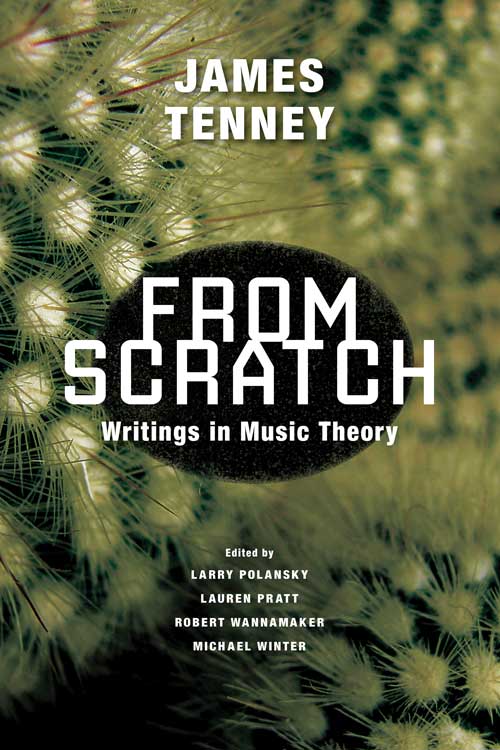 One of the twentieth century's most important musical thinkers, James Tenney did pioneering work in multiple fields, including computer music, tuning theory, and algorithmic and computer-assisted composition. From Scratch arranges, edits, and revises Tenney's hard-to-find writings into one indispensable collection. Selections focus on his fundamental concerns—"what the ear hears"—and include thoughts and ideas on perception and form, tuning systems and especially just intonation, information theory, theories of harmonic space, and stochastic (chance) procedures of composition.

James Tenney was a prolific and important experimental composer, theorist, writer, and performer. His books include Meta + Hodos: A Phenomenology of Twentieth-Century Musical Materials and an Approach to the Study of Form and A History of "Consonance" and "Dissonance". Larry Polansky is Professor of Music at the University of California, Santa Cruz, Emeritus Strauss Professor of Music at Dartmouth College, and founding editor of the Leonardo Music Journal. Lauren Pratt is the associate producer of music at Roy and Edna Disney/CalArts Theater and executor of the Tenney estate. Robert Wannamaker is Associate Dean at the California Institute of the Arts, where he teaches music composition, theory, history, and literature. Michael Winter is a composer, the founder and director of the wulf. in Los Angeles, and helped complete Tenney's final musical work, Arbor Vitae.

"If you want to encounter one of the major thinkers of twentieth century music, James Tenney's writing is worth getting to know, and if you're at all interested in the history of music technology and its development, his writing is essential."--Sound Bytes Magazine

"A testament to avant-garde musical thought from the 1960s until the advent of postmodernism in the 1980s, and it also raises questions that are in many regards perennial. Recommended."--Choice

"Enables us to hear anew Tenney's deep musical resonances, and offers us the gift of Tenney's insights about music."--Notes

"This new book is without doubt a landmark publication for those involved in Tenney scholarship,. . . . This collection of writings provides a superbly revealing insight into Tenney's work, and the couching of prominent texts alongside much less well-known ones helps to enrich the understanding of him and his work." --Tempo

"This collection of essays propels Tenney studies into the next critical stage, making publicly accessible the writings of one of the most compelling musical thinkers in the American contemporary music scene. In their well-selected diversity, these writings are a marvelous expression of the breadth of Tenney's aesthetic and theoretical thinking; surely this book will serve as an essential cornerstone to scholars for decades to come."--David W. Patterson, contributing editor of John Cage: Music, Philosophy, and Intention, 1933–1950

"Tenney's writings provide an invaluable model for artists interested in connecting aesthetics to scientific understandings of human perception and the material world."--Chris Brown, composer and co-director of the Center for Contemporary Music at Mills College