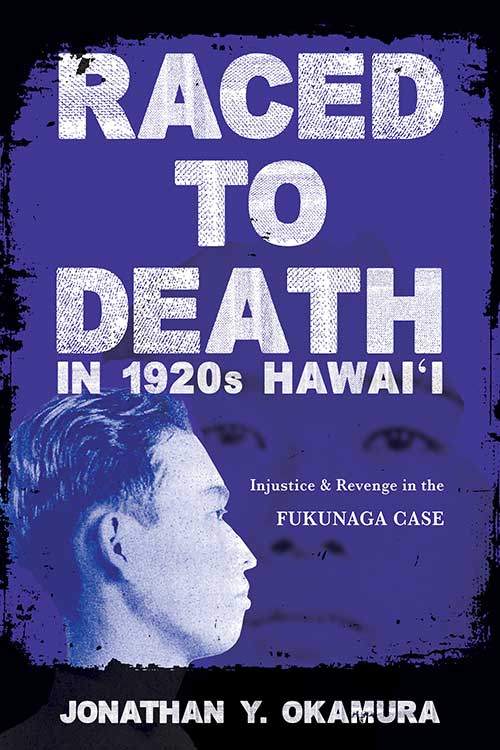 Raced to Death in 1920s Hawaiʽi

On September 18, 1928, Myles Yutaka Fukunaga kidnapped and brutally murdered ten-year-old George Gill Jamieson in Waikîkî. Fukunaga, a nineteen-year-old nisei, or second-generation Japanese American, confessed to the crime. Within three weeks, authorities had convicted him and sentenced him to hang, despite questions about Fukunaga's sanity and a deeply flawed defense by his court-appointed attorneys.

Jonathan Y. Okamura argues that officials "raced" Fukunaga to death—first viewing the accused only as Japanese despite the law supposedly being colorblind, and then hurrying to satisfy the Haole (white) community's demand for revenge. Okamura sets the case against an analysis of the racial hierarchy that undergirded Hawai'ian society, which was dominated by Haoles who saw themselves most threatened by the islands' sizable Japanese American community. The Fukunaga case and others like it in the 1920s reinforced Haole supremacy and maintained the racial boundary that separated Haoles from non-Haoles, particularly through racial injustice. As Okamura challenges the representation of Hawaiʽi as a racial paradise, he reveals the ways Haoles usurped the criminal justice system and reevaluates the tense history of anti-Japanese racism in Hawai'i.

Jonathan Y. Okamura is a professor in the Department of Ethnic Studies at the University of Hawaiʽi. He is the author of several books, most recently From Race to Ethnicity: Interpreting Japanese American Experiences in Hawai'i.

"Okamura's work opens the door for further reflection on how this history fits into larger patterns of U.S. race relations." --Nichi Bei Weekly

" Raced to Death is a needed contribution to the study of Hawai‘i, racism, and the United States justice system. . . . Okamura succeeds in explaining how racial boundaries were maintained in the 1920s to maintain Haole supremacy in Hawai‘i’s racial order." --Ethnic and Racial Studies

"Okamura's investigation of 'racial injustice' and the ways it reinforced racial, social inequalities will be of value to scholars specializing in legal studies and in the American West." --Western Historical Quarterly

"The color line in the United States has historically been and continues to be White vs. Black, yet the salient strength of Raced to Death is to make evident that the color line is, more accurately, White vs. Non-White."--Karen L. Ishizuka, author of Serve the People: Making Asian America in the Long Sixties

"A fascinating account linking racism to colonialism, labor, and criminal justice in an unexpected setting. Okamura’s book makes it impossible to forget Hawai?i when studying comparative race and ethnic relations."--Lon Kurashige, author of Two Faces of Exclusion: The Untold History of Anti-Asian Racism in the United States