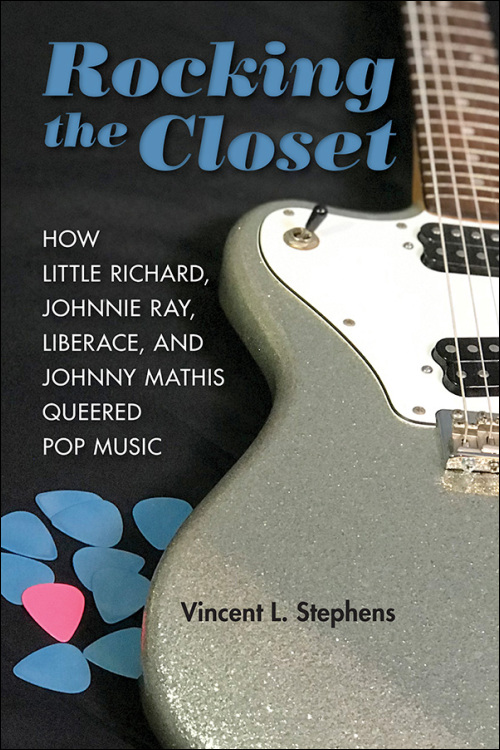 The all-embracing, "whaddya got?" nature of rebellion in Fifties America included pop music's unlikely challenge to entrenched notions of masculinity. Within that upheaval, four prominent artists dared to behave in ways that let the public assume—but not see—their queerness. That these artists cultivated ambiguous sexual personas often reflected an understandable fear, but also a struggle to fulfill personal and professional expectations.

Vincent L. Stephens confronts notions of the closet—both coming out and staying in—by analyzing the careers of Liberace, Johnny Mathis, Johnnie Ray, and Little Richard. Appealing to audiences hungry for novelty and exoticism, the four pop icons used performance and queering techniques that ran the gamut. Liberace's flamboyance shared a spectrum with Mathis's intimate sensitivity while Ray's overwrought displays as "Mr. Emotion" seemed worlds apart from Little Richard's raise-the-roof joyousness. As Stephens shows, the quartet not only thrived in an era of gray flannel manhood, they pioneered the ways generations of later musicians would consciously adopt sexual mystery as an appealing and proven route to success.

* Publication of this book was supported by a grant from the AMS 75 PAYS Endowment of the American Musicological Society, funded in part by the National Endowment for the Humanities and the Andrew W. Mellon Foundation.

Vincent L. Stephens is the director of the Popel Shaw Center for Race & Ethnicity and a contributing faculty member in music at Dickinson College. He is a coeditor of Post Racial America? An Interdisciplinary Study.

"The spirit of Rocking the Closet is enjoyed in how deftly Stephens illuminates those nuances. He is as lucid about the music as about the cultural moment, the entertainment business, and the lives of the musicians." --On the Seawall

"Stephen's Rocking the Closet investigates how contemporary queer stars such as Little Richard navigated the mid-twentieth-century popular music landscape and, as important, how observers reacted to their unconventional gender presentation. . . . Stephens should be commended for the diverse range of primary sources marshalled in his study. . . . Rocking the Closet presents students and practitioners of queer cultural history, as well as those studying post-war cultural history, with fresher methods of examining popular culture and its legacies." --Cultural History

"Distinguished by excellent writing Rocking the Closet achieves the admirable goal of being both a sound scholarly work and accessible to readers from all walks of life. It raises provocative ideas and arguments, challenging entrenched ways of thinking about the history of queerness in postwar America." --Notes

"This is culturally and historically informed scholarship of the highest order. Stephens seeks to question and complicate the established historical way of thinking, and to provide a nuanced reading of queerness that admits the powerful possibilities of the 'open secret' in a pre-Liberation era when popular male musicians neither could nor necessarily desired to come out of the closet."--Theo Cateforis, author of Are We Not New Wave? Modern Pop at the Turn of the 1980s

"The contemporary mainstream LGBT narrative claims that artists should out themselves for the greater good. But Rocking the Closet makes a persuasive case that 'open secrecy' helped make stars of Little Richard, Liberace, Johnny Mathis, and Johnny Ray in the decades prior to and after Stonewall. These (until now) academically under-examined, yet enormously successful and influential musicians used the surprising leeway of the glass closet to develop artistic personae that were both appealing and ambiguous, leading to commercial success that rivals that of our current musicians. Stephens' insightful intersectional book will liven the debate in identity and popular culture scholarship!"--Shana Goldin-Perschbacher, Temple University