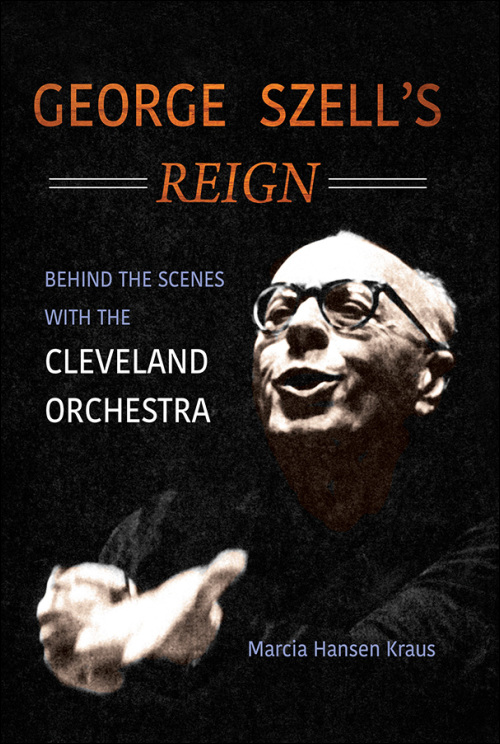 George Szell was the Cleveland Orchestra’s towering presence for over a quarter of a century. From the boardroom to the stage, Szell’s powerful personality affected every aspect of a musical institution he reshaped in his own perfectionist image.

Marcia Hansen Kraus’s participation in Cleveland’s classical musical scene allowed her an intimate view of Szell and his achievements. A musician herself, and married to an oboist who worked under Szell, Kraus pulls back the curtain on this storied era through fascinating interviews with orchestra musicians and patrons. Their recollections combine with Kraus’s own to paint a portrait of a multifaceted individual who both earned and transcended his tyrannical reputation. If some musicians hated Szell, others loved him or at the least respected his fair-minded toughness. A great many remember playing under his difficult leadership as the high point in their professional lives.

Filled with vivid backstage stories, George Szell’s Reign reveals the human side of a great orchestra—and how one visionary built a premier classical music institution.

Marcia Hansen Kraus is a musician and composer in Cleveland, Ohio.

"The author gives us an entertaining and revealing picture of Szell working with his musicians over the years. After you read this you will know him better than if it had been a mere biography. When you finish a chapter you are eager to go on to the next, because it's a fascinating tale--and sometimes it's even rather amazing."--American Record Guide

“Kraus has collected a multitude of telling personal accounts. Charming and illuminating anecdotes that depict interactions among the players and between individual players and the maestro abound, along with sometimes humorous and sometimes harsh instances of Szell’s behavior.”--Mary Sue Welsh, author of One Woman in a Hundred: Edna Phillips and the Philadelphia Orchestra