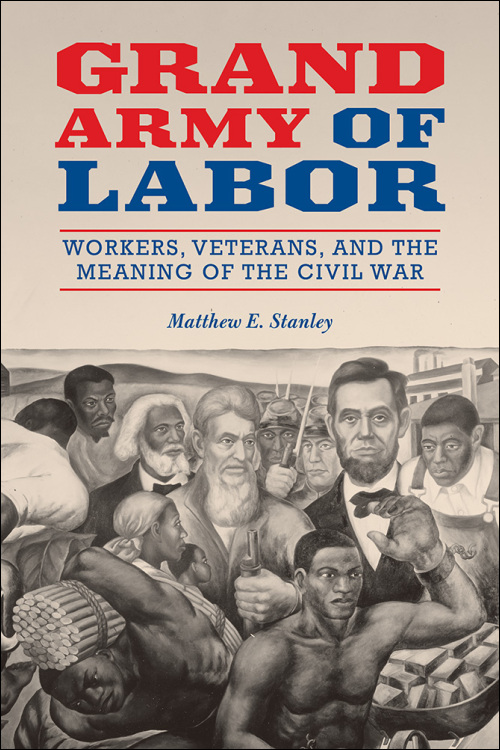 From the Gilded Age through the Progressive era, labor movements reinterpreted Abraham Lincoln as a liberator of working people while workers equated activism with their own service fighting for freedom during the war. Matthew E. Stanley explores the wide-ranging meanings and diverse imagery used by Civil War veterans within the sprawling radical politics of the time. As he shows, a rich world of rituals, songs, speeches, and newspapers emerged among the many strains of working-class cultural politics within the labor movement. Yet tensions arose even among allies. Some people rooted Civil War commemoration in nationalism and reform, and in time, these conservative currents marginalized radical workers who tied their remembering to revolution, internationalism, and socialism.

An original consideration of meaning and memory, Grand Army of Labor reveals the complex ways workers drew on themes of emancipation and equality in the long battle for workers’ rights.

Matthew E. Stanley is an associate professor of history at Albany State University. He is the author of The Loyal West: Civil War and Reunion in Middle America.

"Grand Army of Labor: Workers, Veterans, and the Meaning of the Civil War shows how industrial workers, farmers, and radicals deployed an 'antislavery vernacular' in their struggles against Gilded Age and Progressive Era capitalism. They cast themselves as the natural torchbearers of the antebellum free labor ideal, which, they argued, targeted not only chattel slavery, but wage labor — heralding what Karl Marx envisioned as a 'new era of the emancipation of labor.'" --Jacobin

"The real value of Grand Army of Labor lies in its analysis and perspective, which shed new light on well-known figures and events. . . . In an era when Americans are hotly contesting the memory and legacy of the Civil War in ways that have significant social and political ramifications, Stanley's book certainly carries relevance for some of the challenges facing the nation today." --H-CivWar

"Matthew Stanley’s capacious study gives many voices their due in this decades long struggle to harness the meaning of the Civil War into the fight for a more democratic America." --Civil War Monitor

"Stanley adds a valuable layer of analysis to an already well-studied post-Civil War commemorative ethos. . . . It is next to impossible to understand today's sensibilities and contentions without understanding the Civil War. Grand Army of Labor supports that statement." --Ohio Valley History

"One of the most powerful suggestions in Stanley's book is the recognition that the era's labor and populist movements can't be fully understood except through the afterlives of slavery generally, and the Civil War in particular." --American Studies Journal

"Stanley's outstanding study reminds us of the power of symbols--including popular images of antislavery leaders, such as Abraham Lincoln, and abolitionist martyrs, such as John Brown--as well as incomplete and skewed historical representations, such as the Lost Cause." --Journal of the Civil War Era

"As Matthew Stanley shows, the foot-soldiers in Grand Army of Labor lost many of their initial electoral battles. Yet pioneering efforts ultimately succeeded in popularizing the idea that veterans’ benefits were a good working model for more expansive social welfare programs, benefiting all U.S. workers and their families." --Against the Current

"This book is a must for those who would strive to replace marble men with stories of people who lived and died fighting against monopoly, white supremacy, inequality, militarism, convict labor, and a growing internal empire." --Journal of American History

"This powerful and judicious study changes how we think about Civil War memories and working-class histories. Sure grasp of the multiplicity of United States labor--African American and white, native-born and newcoming, female and male, North and South, veteran and not--illuminates how a constantly recreated remembrance of the emancipatory side of the war could produce a broad language of freedom, one bound to contain its own contradictions and limitations."--David Roediger, author of Seizing Freedom: Slave Emancipation and Liberty for All

"With erudition, sensitivity, and sophistication, Matthew Stanley shows us how the U.S. Civil War lived on in the memory of the country’s labor movement during the decades that followed--symbolizing and dramatizing values and aspirations and therefore inevitably becoming itself a terrain of struggle among the movement’s contending factions."--Bruce Levine, author of The Fall of the House of Dixie: The Civil War and the Social Revolution That Transformed the South

"In often surprising and unexpected ways, Grand Army of Labor tells us how the experience, imagery, and memory of the Civil War shaped the United States labor movement. The result is a history of divergent movements, from Greenbackism to Debsian socialism, that were at times expansively emancipatory and at others tragically narrow. It is a history chock full of lessons for our present moment."--Charles Postel, author of Equality: An American Dilemma, 1866–1896