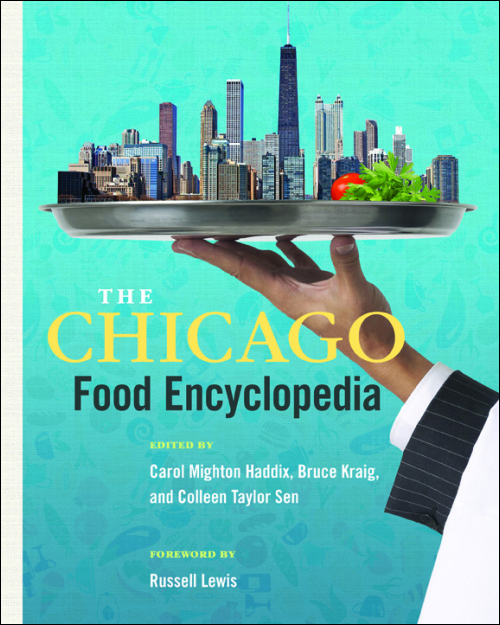 The Chicago Food Encyclopedia is a far-ranging portrait of an American culinary paradise. Hundreds of entries deliver all of the visionary restauranteurs, Michelin superstars, beloved haunts, and food companies of today and yesterday. More than one hundred sumptuous images include thirty full-color photographs that transport readers to dining rooms and food stands across the city. Throughout, a roster of writers, scholars, and industry experts pays tribute to an expansive--and still expanding--food history that not only helped build Chicago but fed a growing nation.

Pizza. Alinea. Wrigley Spearmint. Soul food. Rick Bayless. Hot Dogs. Koreatown. Everest. All served up A-Z, and all part of the ultimate reference on Chicago and its food.

Carol Mighton Haddix is the former food editor of the Chicago Tribune. She is editor of Ethnic Chicago Cookbook: Ethnic-Inspired Recipes from the Pages of the Chicago Tribune. Bruce Kraig is professor emeritus in history and the humanities at Roosevelt University. He is the author of Hot Dog: A Global History, and coauthor (with Colleen Taylor Sen) of Street Food: Everything You Need to Know about Open-Air Stands, Carts, and Food Trucks across the Globe. Colleen Taylor Sen is a food and travel journalist and food historian and the author of Curry: A Global History and Feasts and Fasts: History of Food in India.

"A fun (and mouth-watering) way to learn about the city."--Chicago Reader

"All the indispensably important information is here to be savored."--Booklist

"This sumptuous volume demonstrates why Chicago is widely regarded as one of the world's major food destinations. . . . An outstanding resource for those traveling to the Windy City or anyone who just relishes food."--Library Journal

"This handy reference book will not only help you settle many bets, but more importantly, provide a colorful companion to the many existing volumes of Chicago history. . . . The Chicago Food Encyclopedia indeed helps put Chicago's culinary legacy on the national map."--Classic Chicago Magazine

"The Chicago Food Encyclopedia is a treat for anyone who loves Chicago and loves food!"--Richard Melman, Founder and Chairman, Lettuce Entertain You Enterprises, Inc.

"That Chicago has developed a strong connection to small Midwest farms is perhaps its most undervalued asset. It's this connection we have to the land that has allowed the city's vibrant culinary community to establish itself on the international stage. This authoritative encyclopedia brings us closer to our city's culinary past, present, and future. In exhaustive fashion, it offers a story, and I've always said food with a story always tastes better. This is ours."--Rick Bayless

"From hot dogs to haute cuisine, Chicago has long been home to a culinary culture to rival that of any city in the world. Our food reflects the strength of our diversity, the innovative spirit of our residents, and the world-class culture in the most American of American cities. The Chicago Food Encyclopedia captures the diverse breadth of the past, present, and future of food in the greatest city in the world."--Mayor Rahm Emanuel