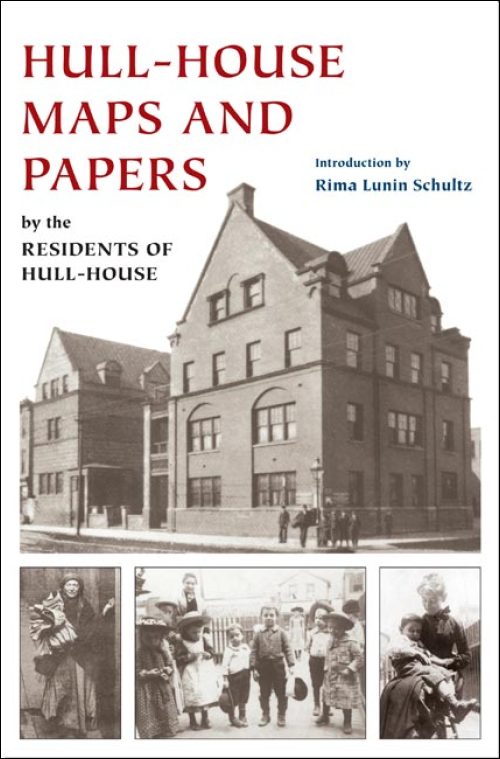 A Presentation of Nationalities and Wages in a Congested District of Chicago, Together with Comments and Essays on Problems Growing Out of the Social Conditions
Author: By Residents of Hull-House
Introduction by Rima Lunin Schultz
Jane Addams’s early attempt to empower the people with information.
Cloth – $57
978-0-252-03134-2
eBook – $19.95
978-0-252-09560-3
Cloth: 02/19/2007
Buy the Book Request Desk/Examination Copy Request Review Copy Request Rights or Permissions Request Alternate Format Preview

Inspired by their Progressive Era faith in social science solutions to society’s problems, the residents of Hull-House collaborated on this work of sociology based on their experiences as residents of Chicago’s Near West Side. The contributors to this book believed that an enlightened citizenry could be mobilized for reform, and that by publishing maps with explicit information about the wages and conditions of the working poor in Chicago’s Nineteenth Ward, they would educate the public and inspire reforms.

In addition to Jane Addams’s own prefatory note and paper on the role of social settlements in the labor movement, contributors provided detailed, real-world analyses of the Chicago Jewish ghetto, garment workers and the sweatshops, child labor, immigrant neighborhoods in the vicinity of Hull-House, and local charities. This edition also contains eight color reproductions of the original Hull-House neighborhood maps. The year 2006 marks the 111th anniversary of the publicationof Hull-House Maps and Papers, and the volume remains a dramatic statement about the residents’ shared values as well as a major influence on subsequent social surveys.

Rima Lunin Schultz is the editor of Urban Experience in Chicago: Hull-House and Its Neighborhoods, 1889-1963, an educational website at the Jane Addams Hull-House Museum at the University of Illinois at Chicago (www.uic.edu/jaddams/hull/urbanexp). She is the editor of Women Building Chicago 1790-1990: A Biographical Dictionary.

"This edition . . . is welcome for its thoughtful extended introduction by Rima Lunin Schultz . . . and for the eight full color maps showing wage and ethnicity data accompanying what has been described as the first social survey in the United States."--H-SHGAPE

"This book is a towering statement by early sociologists, especially women, and on outstanding example of the application of knowledge in the community."--Indiana Magazine of History