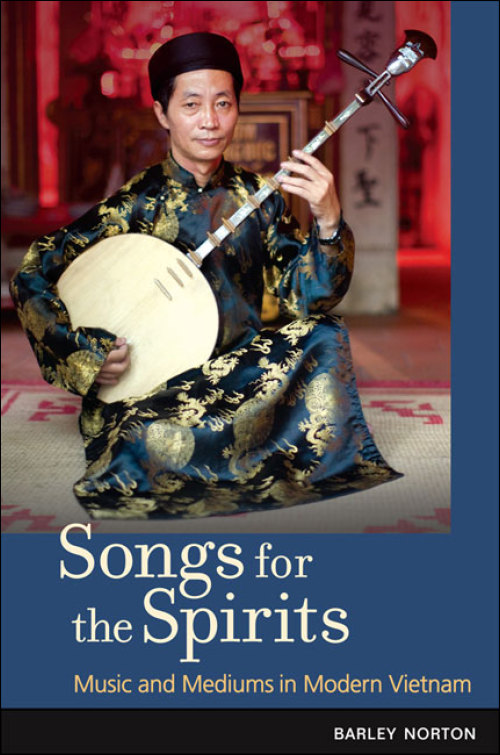 Songs for the Spirits

Songs for the Spirits is the first in-depth study of the Vietnamese practice of communing with spirits through music and performance. During rituals dedicated to a large pantheon of indigenous spirits, a band of musicians perform an elaborate sequence of songs--a "songscape"--for possessed mediums who carry out ritual actions, distribute blessed gifts to disciples, and dance to the music's infectious rhythms. Drawing on extensive fieldwork and his experience of learning to perform ritual music, Barley Norton explores the transformative power of song and the multifaceted relationship between musical and ritual performance, emphasizing the importance of musical interaction, creativity, and change.

The history of Vietnamese mediumship has been marked by considerable controversy. Condemned by French authorities in the colonial period and prohibited by the Vietnamese Communist Party in the late 1950s, rituals were forced underground, and mediumship music underwent a process of modernization. The "songs for the spirits" were incorporated into Western-influenced neotraditional compositions and were transfigured as "revolutionary song" to promote the communist revolution and the war effort. Yet far from being swept away by colonial and socialist exhortations for modernity, mediumship practices have undergone a strong resurgence since the early 1990s, and they are now being drawn upon to promote national identity and cultural heritage through folklorized performances of rituals on the national and international stage.

By tracing the historical trajectory of traditional music and religion since the early twentieth century, this groundbreaking study offers an intriguing account of the political transformation and modernization of Vietnamese cultural practices over a period of dramatic and often turbulent change. It examines how globalization and recent economic, social, and cultural change have affected the meanings and contexts of mediumship and musical performance. An accompanying DVD contains numerous video and music extracts that illustrate the fascinating ways in which music evokes the embodied presence of spirits and their gender and ethnic identities.

Barley Norton is a senior lecturer in ethnomusicology in the music department at Goldsmiths College, University of London. His research on Vietnamese music and culture was the subject the documentary film A Westerner Loves Our Music (Nguoi Tay Me Nhac Ta). He is also a performer of the Vietnamese dan nguyet and dan day lutes.

"The book is comprehensive in its analysis of cultural practices such as len dong, tracing the history of rituals, music and religion in Vietnam back to the early 20th century. . . . The inclusion of a DVD with video clips of mediums performing the spirit ceremonies and audio clips of the music played at the ceremonies makes turns an interesting book into a fascinating multimedia experience.” --Songlines

"An exciting document of a locally diverse and unique ritual practice of the Viet people and their music. . . . A Vital work."--Asian Ethnology

"There is no better study that looks at Vietnamese mediumship music in a thorough, multidisciplinary manner."--Music & Letters

"This book is at once reflexive, accessible, and consistently theorized. Barley Norton is closely attentive to the political life of performance and to the lived reality of rituals in a shifting socialist landscape. His writing is vivid and exacting, and the book's DVD invites a process of reading, watching, and listening that is wonderfully rewarding."--Deborah Wong, author of Speak It Louder: Asian Americans Making Music

"Barley Norton's foundational study provides an indispensable guide to the music that animates Vietnamese mediumship. Choice anecdotes and recordings introduce individual mediums and musicians, demonstrate the musicality of religious experience, and reveal how ritual music is learned, performed, and transformed in Vietnam."--Philip Taylor, editor of Modernity and Re-enchantment: Religion in Post-revolutionary Vietnam

"Songs for the Spirits is the first extensive and accurate ethnomusicological study of the chau van possession rituals in contemporary Vietnam. This study is exceptionally interesting, and it demonstrates the vigor of an ethnomusicologist who is remarkably engaged in both fieldwork operation and post-fieldwork analysis."--Phong T. Nguyen, author of From Rice Paddies and Temple Yards: Traditional Music of Vietnam