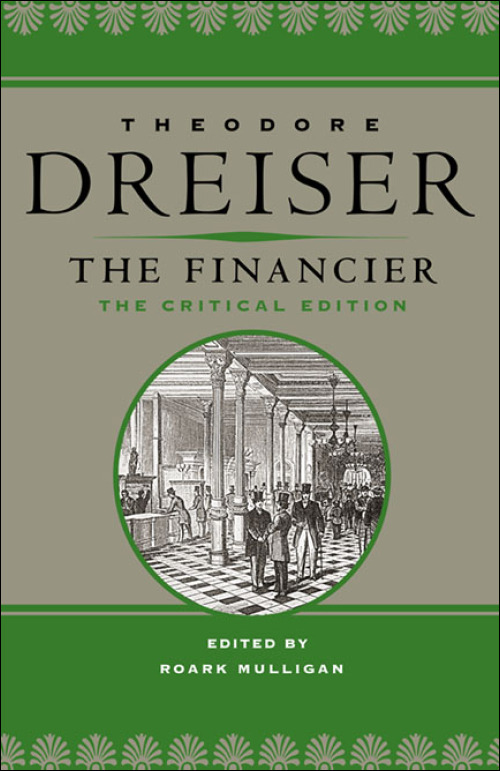 First published in 1912, Theodore Dreiser's third novel, The Financier, captures the ruthlessness and sparkle of the Gilded Age alongside the charismatic amorality of the power brokers and bankers of the mid-nineteenth century. This volume is the first modern edition of The Financier to draw on the uncorrected page proofs of the original 1912 version, which established Dreiser as a master of the American business novel. The novel was the first volume of Dreiser’s Trilogy of Desire, also known as the Cowperwood Trilogy, which includes The Titan (1914) and The Stoic (1947).

Dreiser laboriously researched the business practices and personal exploits of real-life robber baron Charles Yerkes to narrate Frank Algernon Cowperwood's early career in The Financier, which explores the unscrupulous world of finance from the Civil War through the panic incited by the 1871 Chicago fire. In 1927, the monumental novel reappeared in a radically revised version for which Dreiser, notorious for lengthy novels, agreed to cut more than two hundred and seventy pages. This revised version became the most familiar, reprinted by publishers and studied by scholars for decades.

For this new edition, Roark Mulligan meticulously reviewed earlier versions of the novel and its publication history, including the last-minute removal of paragraphs, pages, and even whole chapters from the 1912 edition, cuts based mainly on the advice of H. L. Mencken. The restored text better matches Dreiser's original vision for the work. More than three hundred additional pages not available to modern readers--including those cut from the 1927 edition and more than seventy hastily removed from the manuscript just days before publication in 1912--more effectively establish characterization and motivation. Restored passages dedicated to the internal thoughts of major and minor characters bring a softer dimension to a novel primarily celebrated for its realistic attention to the cold external world of finance.

Mulligan's historical commentary reveals new insights into Dreiser's creative practices and how his business knowledge shaped The Financier. This supplemental material considers the novel's place within the tradition of American business novels and its reflections on the scandalous business practices of the robber baron era.

Theodore Dreiser (1871–1945) was a major American novelist of powerful and unstinting realism. His career peaked with a sequence of masterpieces, including Sister Carrie, Jennie Gerhardt, The Financier, and An American Tragedy. Roark Mulligan is an associate professor of English at Christopher Newport University. His research on Theodore Dreiser has been published in American Literary Realism, English Language Notes, Dreiser Studies, and Studies in American Naturalism.

"The Financier, in this comprehensive new form, reminds one of the important cultural work literature does to enable readers to peer out at a new century through a haze of economic uncertainty."--Studies in American Naturalism

"Roark Mulligan has edited this monumental novel with sensitivity and care. This edition will become the standard edition that readers and scholars will want to consult."--Clare Virginia Eby, editor of the Dreiser Edition of The Genius and coeditor of The Cambridge Companion to Theodore Dreiser

"A richer, considerably more complex version of The Financier by Theodore Dreiser, whose critique of American business practices led reviewers to laud him as the equal of the great European realists. Roark Mulligan's commentary offers a cogent, thorough, and eminently readable exploration of late-nineteenth-century American business practices."--Keith Newlin, editor of A Theodore Dreiser Encyclopedia