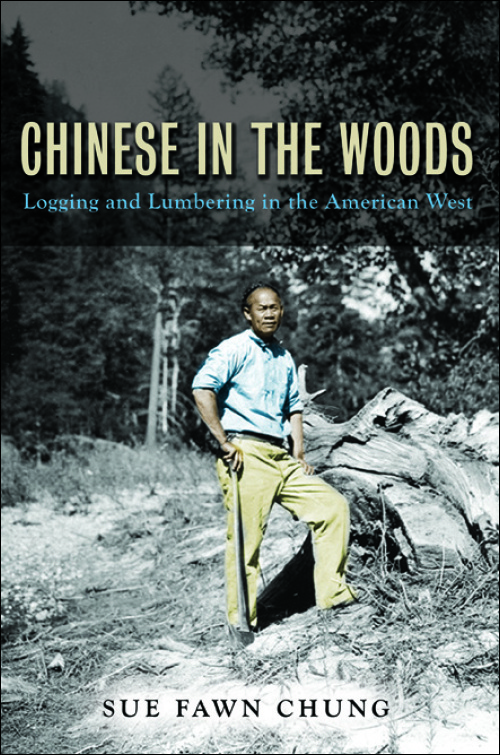 Though recognized for their work in the mining and railroad industries, the Chinese also played a critical role in the nineteenth-century lumber trade. Sue Fawn Chung continues her acclaimed examination of the impact of Chinese immigrants on the American West by bringing to life the tensions, towns, and lumber camps of the Sierra Nevada during a boom period of economic expansion.

Chinese workers labored as woodcutters and flume-herders, lumberjacks and loggers. Exploding the myth of the Chinese as a docile and cheap labor army, Chung shows Chinese laborers earned wages similar to those of non-Asians. Men working as camp cooks, among other jobs, could make even more. At the same time, she draws on archives and archaeology to reconstruct everyday existence, offering evocative portraits of camp living, small town life, personal and work relationships, and the production and technical aspects of a dangerous trade. Chung also explores how Chinese used the legal system to win property and wage rights and how economic and technological change ultimately diminished Chinese participation in the lumber industry.

Eye-opening and meticulous, Chinese in the Woods rewrites an important chapter in the history of labor and the American West.

Sue Fawn Chung is Professor Emerita of history at the University of Nevada, Las Vegas, and author of In Pursuit of Gold: Chinese American Miners and Merchants in the American West, an honor book selection for the Caroline Bancroft History Prize.

"In Chinese in the Woods, historian Sue Fawn Chung fills a notable gap in western history. . . . This book is meticulously researched and combines an impressive array of both secondary and primary sources, including an innovative incorporation of archeological data. . . . Chinese in the Woods could well prove a gold mine of statistical and historical data."--H-Net Reviews

"This research challenges some of the stereotypes of Chinese loggers as "cheap" and docile in the period of merging unionism, anti-Chinese movements, and immigration restrictions. Recommended"--Choice

"Chinese in the Woods is a compelling treatment of the little-known Chinese labor experiences in the logging and lumbering industry and how these workers engaged with the wider community."--American Historical Review

"Chinese in the Woods is a meticulously researched and important contribution to the history of labor in the American West and the critical Chinese played in the lumber trade."--Pacific Historical Review

"Chinese in the Woods is an informative piece of work, exploring a new area in the study of Chinese immigrants in the West."--Western Historical Quarterly

"This is an extremely important study about an important and understudied topic."--Reviews in American History

"Men and timber but much more! Chung's original work opens new vistas on the experience of Chinese and the building of the West. It is a story of labor but also of ethnic experience, trans-Pacific relations, business, and 19th century technologies. A great read!"--Gordon H. Chang, co-editor of Chinese American Voices: From the Gold Rush to the Present

"A richly contextualized and meticulously researched account of a little known yet important group of Chinese immigrant workers, illuminating not only their fascinating experiences but also their role in developing the U.S. economy."--Yong Chen, author of Chinese San Francisco 1850-1943: A Transpacific Community

"A significant contribution to the study of the American West. It also tells us a lot about the lumber industry in California and Nevada--the business, labor, production, and technical aspects--which make for a fascinating subject."--Evelyn Hu-DeHart, editor of Across the Pacific: Asian Americans and Globalization