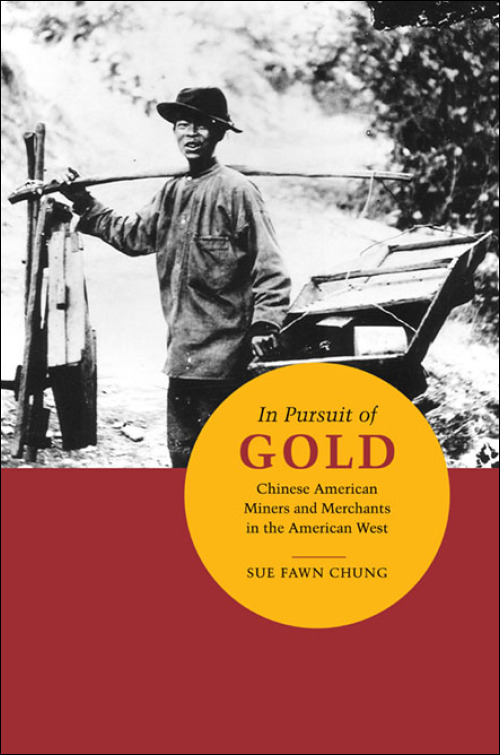 Both a history of an overlooked community and a well-rounded reassessment of prevailing assumptions about Chinese immigrants in the American West, In Pursuit of Gold brings to life in rich detail the world of turn-of-the-century mining towns in the Northwest. Sue Fawn Chung meticulously recreates the lives of Chinese immigrants, miners, merchants, and others who populated these towns and interacted amicably with their white and Native American neighbors, defying the common perception of nineteenth-century Chinese communities as insular enclaves subject to increasing prejudice and violence.

While most research has focused on Chinese miners in California, this book is the first extensive study of Chinese experiences in the towns of John Day in Oregon and Tuscarora, Island Mountain, and Gold Creek in Nevada. Chung illustrates the relationships between miners and merchants within the communities and in the larger context of immigration, arguing that the leaders of the Chinese and non-Chinese communities worked together to create economic interdependence and to short-circuit many of the hostilities and tensions that plagued other mining towns.

Peppered with fascinating details about these communities from the intricacies of Chinese gambling games to the techniques of hydraulic mining, In Pursuit of Gold draws on a wealth of historical materials, including immigration records, census manuscripts, legal documents, newspapers, memoirs, and manuscript collections. Chung supplements this historical research with invaluable firsthand observations of artifacts that she experienced in archaeological digs and restoration efforts at several of the sites of the former booming mining towns.

In clear, analytical prose, Chung expertly characterizes the movement of Chinese miners into Oregon and Nevada, the heyday of their mining efforts in the region, and the decline of the communities due to changes in the mining industry. Highlighting the positive experiences and friendships many of the immigrants had in these relatively isolated mining communities, In Pursuit of Gold also suggests comparisons with the Chinese diaspora in other locations such as British Columbia and South Africa.

Sue Fawn Chung is a professor of history at the University of Nevada, Las Vegas, and coeditor of Chinese American Death Rituals: Respecting the Ancestors.

"An excellent explanation of the familial and cultural links between the Chinese of the Guangdong region and how that influenced their relationships in the United States."--Nevada in the West

"A rich and multifaceted social history of Chinese mining communities in Oregon and Nevada. Scholars of Chinese America will find the book to be a valuable addition to their libraries."--American Historical Review

"With its interesting portraits of little-known towns and the Chinese Americans who inhabited them, In Pursuit of Gold is full of surprises and discoveries. It is a worthy contribution to the study of Chinese in the U.S.A."--Historical Studies in Ethnicity

"Sue Fawn Chung has meticulously reconstructed the story of these Chinese mining enclaves as well as their interactions with the larger communities. Interesting details about many individuals effectively enhance both the book's readability and the author's analysis."--Pacific Historical Review

"In this groundbreaking study, Sue Fawn Chung illumines a world of Chinese miners and merchants that has long been ignored or forgotten. Her focus is on three relatively isolated mining towns in Nevada and Oregon, but her narrative sweep encompasses the broader experiences of the Chinese diaspora. Acknowledging the challenges of discrimination and hostility, Chung demonstrates a wide range of contributions by Chinese Americans and identifies areas of positive interaction with the dominant Euro-American society."--James J. Rawls, coeditor of A Golden State: Mining and Economic Development in Gold Rush California

Recognized as an honor book in the competition for the Denver Public Library's Western History/Genealogy Department Caroline Bancroft History Prize, 2012.