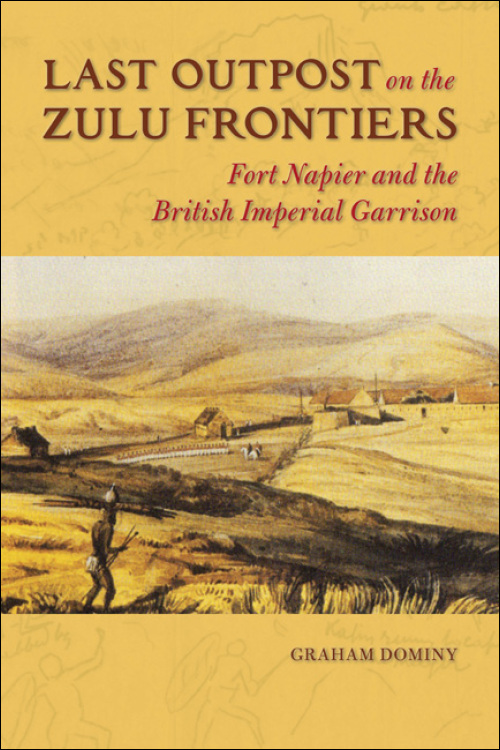 Small and isolated in the Colony of Natal, Fort Napier was long treated like a temporary outpost of the expanding British Empire. Yet British troops manned this South African garrison for over seventy years. Tasked with protecting colonists, the fort became even more significant as an influence on, and reference point for, settler society.

Graham Dominy's Last Outpost on the Zulu Frontiers reveals the unexamined but pivotal role of Fort Napier in the peacetime public dramas of the colony. Its triumphalist colonial-themed pageantry belied colonists's worries about their own vulnerability. As Dominy shows, the cultural, political, and economic methods used by the garrison compensated for this perceived weakness. Settler elites married their daughters to soldiers to create and preserve an English-speaking oligarchy. At the same time, garrison troops formed the backbone of a consumer market that allowed colonists to form banking and property interests that consolidated their control.

A first-of-its-kind social history, Last Outpost on the Zulu Frontiers places Fort Napier and the British, indigenous, and Afrikaner people it affected in the larger context of South Africa's colonial era.

"Dominy's book provides an intimate and indispensable portrait of a colonial society; and one that laid the template for today's South Africa."--The Witness

"Dominy's readable and eclectic study represents an important step forward in both military and imperial historiography; he provides an enhanced and nuanced look at the means of imperial conquest that goes far beyond more traditional emphases on worn-out themes such as technological superiority and strategic planning. . . . Ultimately, the great value of Dominy's study is its ability to highlight the importance of local actors in shaping the imperial experience."--Journal of Military History

"[An] outstanding contribution to our historiography."--Pretoria News

"Dominy has done a wonderful job of examining the history of a garrison, a people, a colony, and an imperial idea."--American Historical Review

"Dominy excels in analyzing the broader social context of the garrison."--IJAHS

"A noteworthy addition to South African historiography and well worth reading."--Victorian Military Society

"Truly places Fort Napier's history within several broader contexts--the settlement of Natal, the response of the indigenous inhabitants, the relationships between 'British' and other settlers, the wider history of the British army in the period, and the novel involvement of women protesting against the British advance. This is far from a narrow 'red coat' history."--Peter Stanley, author of White Mutiny: British Military Culture in India

"Quite original. Rather than looking at campaigns and battles, the book shows how issues such as military parades, band performances, social events, marriages between soldiers and local settler women, and soldiers's bad behavior shaped settler society in Natal."--Timothy Stapleton, author of The Military History of Africa

"An engrossing account, vividly illuminating the complexity of life within an imperial garrison and offering valuable insights into the impact of the military on southeast Africa's diverse societies and on Natal's development"--John Lambert, Professor Emeritus of the University of South Africa and author of Betrayed Trust: Africans and the State in Colonial Natal

"This remarkable account of military-civil relations on an African frontier tells how the permanent British garrison of Natal interacted with and indelibly influenced settler society in the colonial capital."--Paul Thompson, University of Kwazulu-Natal

"This is a fascinating story of wars and balls on the very fringes of empire, of exotic adventures and routine drudgery, of lightning strikes on parade, of nuances of social affectation, and of mutiny. Most of all it is a reminder of just how essential the military presence was to the growth and security of British settlement around the world in the nineteenth-century."--Ian Knight, author of Zulu Rising: The Epic Story of iSandlwana and Rorke's Drift