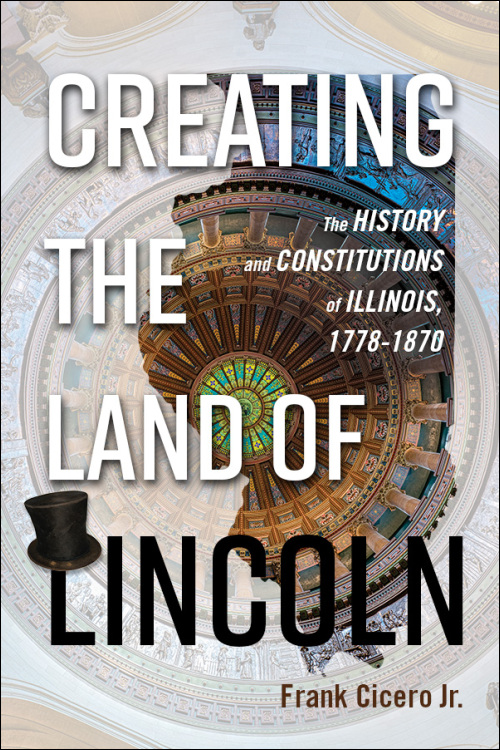 In its early days, Illinois seemed destined to extend the American South. Its population of transplants lived an upland southern culture and in some cases owned slaves. Yet the nineteenth century and three constitutions recast Illinois as a crucible of northern strength and American progress.

Frank Cicero Jr. provides an appealing new history of Illinois as expressed by the state’s constitutions—and the lively conventions that led to each one. In Creating the Land of Lincoln, Cicero sheds light on the vital debates of delegates who, freed from electoral necessity, revealed the opinions, prejudices, sentiments, and dreams of Illinoisans at critical junctures in state history. Cicero analyzes decisions large and small that fostered momentous social and political changes. The addition of northern land in the 1818 constitution, for instance, opened up the state to immigrant populations that reoriented Illinois to the north. Legislative abuses and rancor over free blacks influenced the 1848 document and the subsequent rise of a Republican Party that gave the nation Abraham Lincoln as its president. Cicero concludes with the 1870 constitution, revealing how its dialogues and resolutions set the state on the modern course that still endures today.

Frank Cicero Jr. is a senior partner at Kirkland and Ellis LLP and served as a delegate for Illinois’s Sixth Constitutional Convention. He is the author of Relative Strangers: Italian Protestants in the Catholic World.

"Carefully researched and engagingly written . . . . Creating the Land of Lincoln is wonderfully rewarding." --The Annals of Iowa

"Cicero defly assesses the development of the Illinois constitutions and shows how the state dealt with key racial and cultural issues within a complex political system. He highlights the roles of a number of Illinois leaders. This fine book will benefit scholars and the public." --Journal of American History

"This book should be in the personal library of every person interested in the history of the state of Illinois." --Journal of the Illinois State Historical Society

“Well-written, clearly organized, traditional history that shows the changing issues in Illinois politics and government. The focus on the history of slavery is important and noteworthy. A real contribution.”--Ann Durkin Keating, author of Rising Up from Indian Country: The Battle of Fort Dearborn and the Birth of Chicago

“Extremely strong in research, clarity, and narrative. As I read, I knew I was in the hands of a skilled researcher, one who had really mastered a complex sequence of events and learned and digested a complex set of political debates.”--Robert Michael Morrissey, author of Empire by Collaboration: Indians, Colonists, and Governments in Colonial Illinois Country

“Attractively written, this book provides a fresh look at underappreciated elements of Illinois’s state formation and early development, with compelling new insights into the story of the state’s constitutions.”--David Spadafora, President and Librarian, The Newberry Library