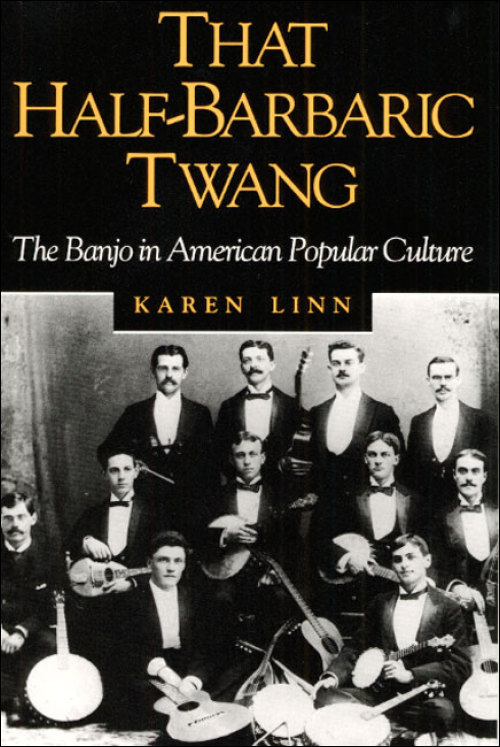 Long a symbol of American culture, the banjo actually originated in Africa before European-Americans adopted it. Karen Linn shows how the banjo--despite design innovations and several modernizing agendas--has failed to escape its image as a "half-barbaric" instrument symbolic of antimodernism and sentimentalism.

Caught in the morass of American racial attitudes and often used to express ambivalence toward modern industrial society, the banjo stood in opposition to the "official" values of rationalism, modernism, and belief in the beneficence of material progress. Linn uses popular literature, visual arts, advertisements, film, performance practices, instrument construction and decoration, and song lyrics to illustrate how notions about the banjo have changed.

Linn also traces the instrument from its African origins through the 1980s, alternating between themes of urban modernization and rural nostalgia. She examines the banjo fad of bourgeois Northerners during the late nineteenth century; the African-American banjo tradition and the commercially popular cultural image of the southern black banjo player; the banjo's use in ragtime and early jazz; and the image of the white Southerner and mountaineer as banjo player.

Karen Linn is an archivist in the Manuscript Division of the Library of Congress. She has published articles in North Carolina Folklore Journal and American Music.

"Well written and well researched; Linn has amassed an impressive amount of data, and she uses it effectively. . . . This is an excellent book that should be of interest to not only historians, folklorists, and musicologists but also the banjo player and the general reader."--Charlie Seemann, Journal of Southern History

"An absolute must read for anyone interested in the banjo."--Five Stringer

"Concise, well-supported, and provocative. . . . The clearest voice of revelation regarding American's most misunderstood instrument."--Bob Fulcher, Journal of Country Music

"An intriguing analysis of the role of the banjo in recent American culture and society. . . . Highly recommended."--R. D. Cohen, Choice

"Uses everything from sentimental novels and escaped slave posters to Felix the Cat cartoons and magazine advertisements to create impressive cultural history of what the author calls the 'idea of the banjo.' . . . Linn's wonderful book is scholarly without being jargoned, serious without being tedious. . . . A book for dipping into, underlining, reading aloud in snatches, and opening repeatedly."--Rachel Rubin, Banjo Newsletter