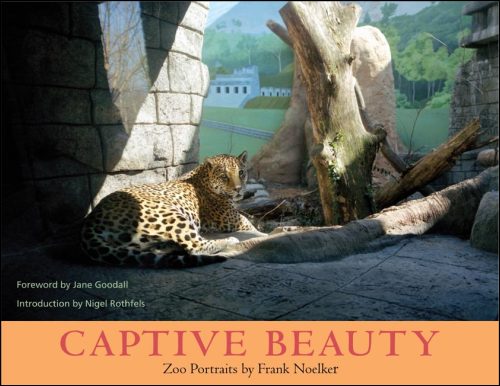 The fifty color photographs in Frank Noelker's Captive Beauty are not simple, uncomplicated shots of animals in zoo settings; there is an ambivalence in them that only gradually envelops the viewer. Their sad, stark beauty confronts viewers, challenging them to consider the nature, purpose, and effects of zoos. Captive Beauty includes a short epigraph by the photographer.

Frank Noelker is an associate professor of art at the University of Connecticut. His photographs of animals in zoos have been widely exhibited, both in solo and group exhibits, and are included in the permanent collections of a number of museums. He has published a limited-edition portfolio, Animals. Jane Goodall, a National Geographic Society Explorer-in-Residence and founder of the Jane Goodall Institute for Wildlife Research, Education, and Conservation, is the recipient of numerous honors and awards for her work on behalf of wild chimpanzees in particular and the natural world in general. In 2002 she was appointed U.N. Messenger of Peace. Nigel Rothfels is the director of the Edison Initiative at the University of Wisconsin at Milwaukee, the author of Savages and Beasts: The Birth of the Modern Zoo, and the editor of Representing Animals.

"Frank Noelker's work makes a powerful statement. It is both beautiful and profoundly disturbing. He has captured, in this series of portraits, the very essence of the problem of zoos. . . . This book is not intended as an indictment against all zoos, but rather as a plea for greater understanding of the animal beings within them."--Jane Goodall, from the Foreword

"I wonder what the animals behind the bars saw when they watched Frank and his camera? Did they know he was unusual for his species? A rarity, almost extinct amongst humans. Not a white tiger, or the last carrier pigeon, but a human being who still had empathy, and believed that we humans have choices, even at five minutes to midnight. . . . The animals must have perceived from their isolated cells, death row for most of them, that this was a man who was free, but chained to their fate in some way."--Sue Coe, artist, activist, and author of Dead Meat and Pit's Letter