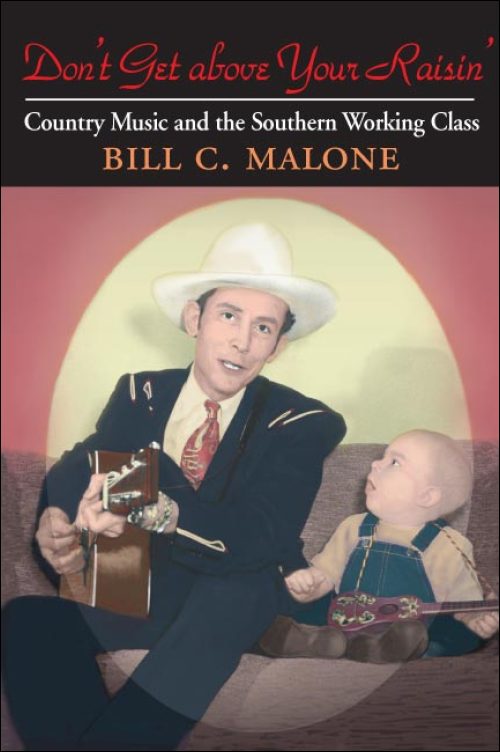 Combining a high-spirited history of country music's roots with vivid portraits of essential performers, Don't Get above Your Raisin' examines the close relationship between "America's truest music" and the working class culture that constituted its principal source, nurtured its development, and provided its most dedicated fans.

Recognized as country music's senior authority, Bill C. Malone explores how the music's defining themes (home and family, religion, rambling, frolic, humor, and politics) emerged from working people's day-to-day lives. He traces the many contradictory voices and messages of a music that simultaneously extols the virtues of home and the joys of rambling, the assurances of the Christian life and the ecstasies of hedonism, the strength of working class life and the lure of middle class aspirations. The resulting tensions and the powerful expression of the hopes, longings, frailties, and failings of ordinary people allow country music to resonate with listeners beyond its core constituency as they struggle in a complex and uncertain world.

Bill C. Malone is a professor emeritus of history at Tulane University. He is the author of Country Music, U.S.A.; Southern Music/American Music; Singing Cowboys and Musical Mountaineers: Southern Culture and the Roots of Country Music, and other books.

"A lucid study of the relationship between country music and the Southern working class. . . . [Malone] obviously loves the music and understands its relationship to the people who originally gave it life. . . . Readers looking to go beyond today's stars and into the very heart and soul of the music will not be disappointed. Essential for anyone interested in a well-grounded and researched overview of the topic, this thoughtful book is highly recommended."--Library Journal

"Adds significantly to an understanding of the music's nuanced history. . . . The author deftly explores a range of topics: country music's rural roots and dreams; its complicated connection both to conservative working class and Christian values and to rambling men and hell-raisers; its dance-based popularity; its extensive use of musical and performance comedy; and its generally patriotic slant. . . . Very highly recommended."--Choice

"Bill Malone has the rare gift of being able to evaluate a culture from within, to make it live and breathe even as he dissects it with great precision. His knowledge is encyclopedic, his range incredible, and his work distinguished by an intensely appealing human quality."--James Cobb, author of Redefining Southern Culture: Mind and Identity in the Modern South