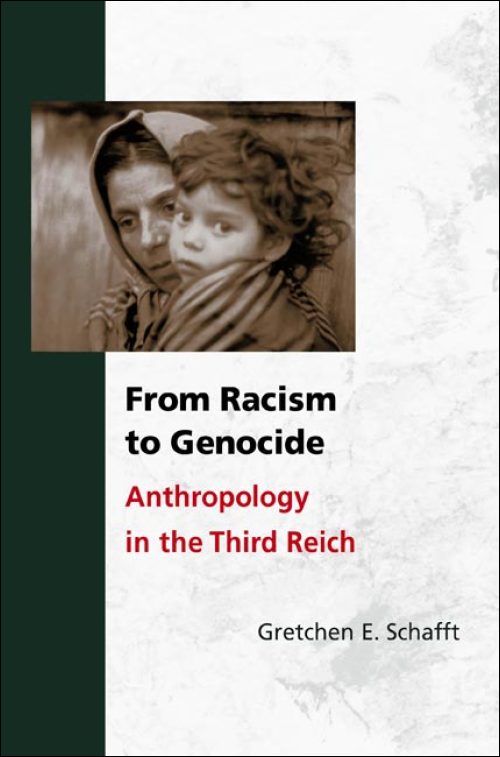 From Racism to Genocide is an explosive, richly detailed account of how Nazi anthropologists justified racism, developed practical applications of racist theory, and eventually participated in every phase of the Holocaust.

Using original sources and previously unpublished documentation, Gretchen E. Schafft shows the total range of anti-human activity from within the confines of a particular discipline. Based on seven years of archival research in this country and abroad, the work includes many original photos and documents, most of which have never before been published. It uses primary data and original texts whenever possible, including correspondence written by perpetrators. Her discussions of Hitler's "final solution," Nazi slave labor, and the rape of occupied Poland evoke the full horror of the Third Reich. The concepts embedded throughout the book of "scientism," "denial," "academic responsibility," and "race" contribute to understanding some of today's most pressing social science issues.

The book also reveals that the United States was not merely a bystander in this research, but instead contributed professional and financial support to early racial research that continued through the first five years of Hitler's regime.

Gretchen E. Schafft is applied anthropologist-in-residence at the American University in Washington, D.C.

"This is a heartfelt plea for anthropologists to recognize the dehumanizing, and sometimes even murderous, consequences of their pursuit of "science" and to be sure that, in the future, the quest for knowledge does not compromise the humanity of research 'subjects.'"--Journal of Modern History

"From Racism to Genocide is one of the more important books on the history of anthropology to be published in the last three decades. The importance of Gretchen Schafft's book can perhaps best be measured by considering the enormous weight of uncomfortably uncontested silence surrounding scholarly considerations of the uses and meanings of German anthropology under the Nazis. The significance and meaning of this silence becomes apparent upon consideration of what Schafft accomplishes in this vital book. Schafft not only breaks this silence using unsettling and rich documentation, but she provides nuanced interpretations and ethical critiques of these anthropological misapplications."--David H. Price, Anthropological Quarterly

"An informative textbook with a clear message about scientific responsibility and morality. . . . The author should be praised."--Patterns of Prejudice

"A valuable contribution to our understanding of the relationship between National Socialism and anthropology."--Current Anthropology