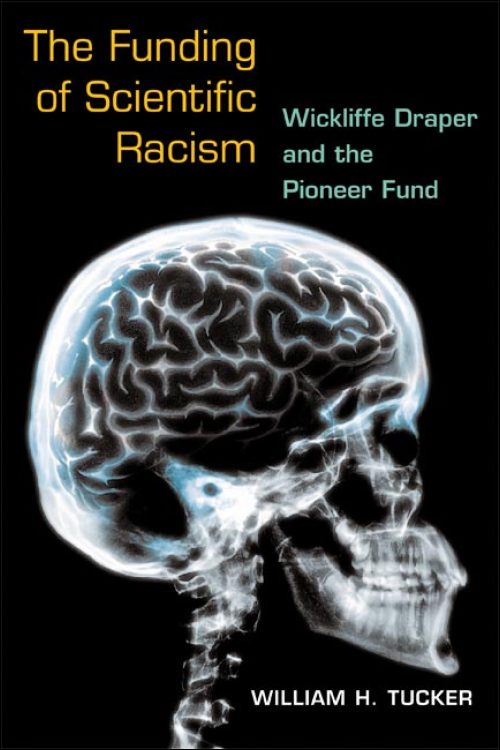 Established in 1937 by wealthy businessman Wickliffe Draper, the nonprofit Pioneer Fund has long been accused of misusing social science to fuel the politics of oppression by supporting research that seeks to establish the genetic and intellectual inferiority of blacks.

Although the Pioneer Fund denies its ties to any political agenda, this powerful and provocative volume reveals the truth behind their long history of clandestine activities. The Funding of Scientific Racism examines for the first time archival correspondence that incriminates the fund’s major players, revealing links to a Klansman’s crusade to repatriate blacks, as well as efforts to reverse the Brown decision, prevent passage of the Civil Rights Act, and implement a system of racially segregated private schools.

William H. Tucker is a professor of psychology at Rutgers University-Camden and the author of The Cattell Controversy: Race, Science, and Ideology and the award-winning The Science and Politics of Racial Research.

"In telling this story, Tucker both shows that classic scientific racist theories continued to influence American life long after their heyday in the decade after World War I and reveals that purveyors of those theories found allies among mainstream political leaders as well as so-called extremists. . . . Readers with slight interest in Draper, Weyher, and the Pioneer Fund can nonetheless learn much about what Tucker calls a distinct 'political subsulture' of pseudo-scientific racism."--Journal of Southern History

"Tucker has sought to get around the fact that the records of the Pioneer Fund are closed by piecing together much of its story from the archives of various people involved in its projects. The effort, supplemented by research in a number of primary and secondary sources, including newsletters, tracts, and books produced by Draper's protégés, has paid off handsomely, yielding a plausible account of a socially dark and intellectually perverse fragment of American conservatism."--Journal of American History

"[Eugenics issues] take on a dramatic character when viewed in the light of William Tucker's interesting and important book. This is an extremely detailed and thoroughly researched book. . . . It makes for fascinating reading."--Journal of Sociology and Social Welfare

"The Funding of Scientific Racism is compelling and readable. Tucker demolishes the threadbare defenses the Pioneer Fund and its supporters have concocted over the last two decades."--Barry Mehler, founder and executive director of the Institute for the Study of Academic Racism