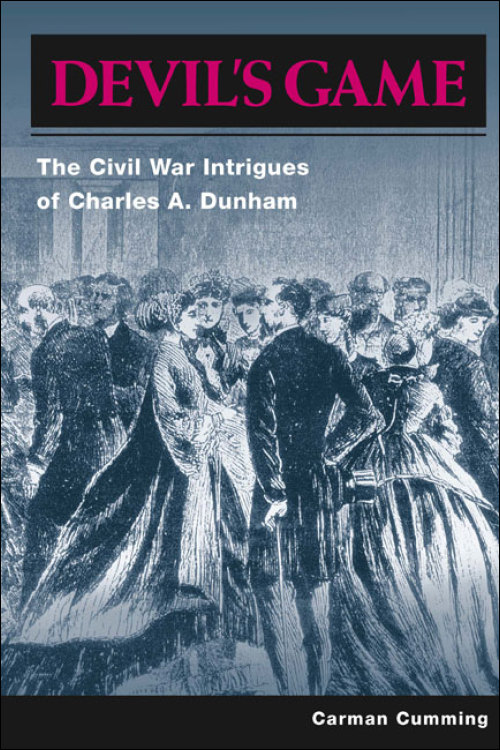 Devil's Game traces the amazing career of Charles A. Dunham, Civil War spy, forger, journalist, and master of dirty tricks. Writing for a variety of New York papers under alternate names, Dunham routinely faked stories, created new identities, and later boldly cast himself to play those roles. He achieved his greatest infamy when he was called to testify in Washington concerning Abraham Lincoln's assassination. Many parts of Dunham's career remain shadowy, but Cumming offers the first detailed tour of Dunham's convoluted, high-stakes, international deceits, including his effort to sell Lincoln on plans for a raid to capture Jefferson Davis. Exhaustively researched and unprecedented in depth, this carefully crafted assessment of Dunham's motives, personality, and the complex effects of his schemes changes assumptions about covert operations during the Civil War.

"The first extensive treatment of [Dunham's] mendacious career. . . . Well worth reading for a glimpse at the termites that are eternally at work in the foundations of historical truth."--Civil War Book Review

"During the Civil War, Charles A. Dunham successfully and profitably enacted the role of agent provocateur for both the Confederacy and the United States. His intricate hoaxes, eagerly accepted by credulous editors and officials, were important in establishing the fear of catastrophe that periodically infected both sides. So convincing were his lies and so anxious were his patrons to believe the worst of the enemy, that even after his exposure as an unscrupulous fraud he continued to be well-paid for his stories. Readers of this superlative book will likely come away with a new view of the Civil War."--William Hanchett, author of Lincoln Murder Conspiracies