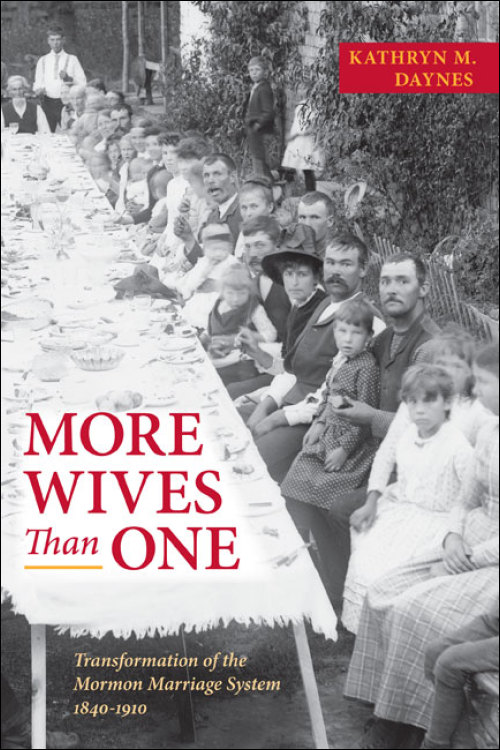 More Wives Than One offers an in-depth look at the long-term interaction between belief and the practice of polygamy, or plural marriage, among the Latter-day Saints. Focusing on the small community of Manti, Utah, Kathryn M. Daynes provides an intimate view of how Mormon doctrine and Utah laws on marriage and divorce were applied in people's lives.

Kathryn M. Daynes, an associate professor of history at Brigham Young University, is a contributor to Nauvoo in Mormon History and Fulfilling the Founding: A Reader for American Heritage.

"Kathryn M. Daynes's book is the most important study to date of plural marriage in nineteenth-century Utah and is especially significant for its detailed analysis of the demographics of Mormonism's 'peculiar institution.'"--American Historical Review

"The scope of Kathryn Daynes's book is truly breathtaking and richly deserves being honored. . . . Clearly, this book is absolutely essential for anyone who wants to understand Mormonism's nineteenth-century marriage relationships."--Journal of Mormon History

"Daynes's excellent study of the rise and decline of polygamy in the Church of Jesus Christ of Latter-day Saints is an important contribution to our understanding of Mormonism. . . . Subtle and informative, Daynes's book is social history at its best."--Religious Studies Review

"The most complete and methodical account of Mormon polygamy to date. . . . More than any previous work, More Wives Than One provides scholars and general readers specific information about the intersection between belief and practice of this often misconstrued marriage system."--Nova Religio

"Daynes has given us a clear and cogent explanation for the rules and regulations of the nineteenth-century Mormon marriage system. Daynes has also helped us understand the complexity of the interactions of the church, the law, and the family that shaped the system and necessitated its revisions. All subsequent study of this system must now begin with her work."--Western Historical Quarterly

"This superb book is far and away the best study of Mormon polygamy ever to appear. Kathryn Daynes provides a feast of information and historical context, summarizing and analyzing intelligently and with admirable balance virtually every issue that has ever been raised in connection with Mormon polygamy. This is a gem."--Dean L. May, author of Three Frontiers: Family, Land, and Society in the American West, 1850-1900

"Kathryn Daynes's More Wives Than One is the most authoritative account of Mormon 'plural marriage'--polygamy--ever written. A clear, engaging history of marriage in one nineteenth-century Mormon town, Manti, Utah, More Wives Than One offers an imaginative, thorough, and scrupulously fair account of Mormonism's most controversial spiritual practice in all its social and religious dimensions--a radiant example of scholarship's enlivening intellectual potential."--Jon Butler, author of Religion in Colonial America

"Kathryn Daynes has combined meticulous research into the lives of families in Manti, Utah, with a superb sense of the interaction between law and religion. This book is a multi-faceted jewel, illuminating the clashes of doctrine and legislation in nineteenth-century Utah, and the meaning that such clashes had in the lives of individuals. No prior book on polygamy has given us such a rich and thoughtful account of how the Mormon marriage system affected all of society, as well as those who lived the principle."--Sarah Barringer Gordon, author of The Mormon Question: Polygamy and Constitutional Conflict in Nineteenth-Century America