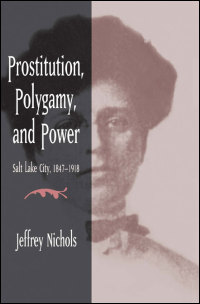 Prostitution, Polygamy, and Power reveals insights into the complex history of prostitution in Salt Lake City. After the transcontinental railroad opened Utah to large-scale emigration and market capitalism, hundreds of women in Salt Lake City began to sell sex for a living, and a few earned small fortunes. Businessmen and politicians developed a financial stake in prostitution, which was regulated by both Mormon and gentile officials.

Jeffrey Nichols examines how prostitution became a focal point in the moral contest between Mormons and gentiles and aided in the construction of gender systems, moral standards, and the city's physical and economic landscapes. Gentiles likened polygamy to prostitution and accused polygamous Mormons of violating Christian norms of family structure and sexual behavior. Defending their church and its ideals, Mormons blamed gentiles for introducing the sinful business of prostitution into their honorable city. Nichols traces the interplay of prostitution and reform from the 1890s, when the Church of Jesus Christ of Latter-day Saints began to move away from polygamy, to World War I, when Mormon and gentile moral codes converged at the expense of prostitutes. He also considers how the conflict over polygamy distinguished Salt Lake City from other cities struggling to abolish prostitution in the Progressive Era.

Jeffrey Nichols is an associate professor of history at Westminster College in Salt Lake City.

"A fresh, revealing overview of two topics in Salt Lake City's history that often have been considered, if not taboo, then generally too delicate for close, honest inspection. [Jeffrey Nichols's] study treats polygamy and prostitution issues with honesty, sensitivity, and a professional historian's eye for detail and documentation. . . . A fascinating read."--Dialogue: A Journal of Mormon Thought

"A useful contribution to the history of both commercial sex and western politics."--Journal of American History

"This admirable and sympathetic treatment of prostitution in Utah's biggest city is a welcome addition to the literature. Nichols has given us a well-documented business and labor history of the sex trade for his period."--American Historical Review