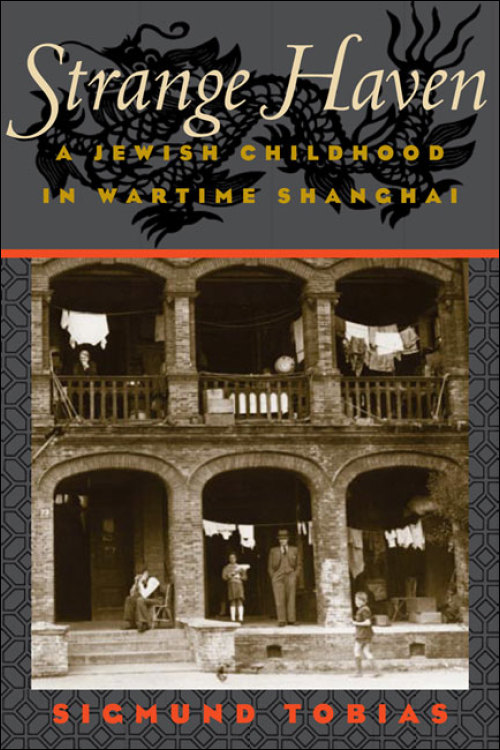 In the wake of Kristallnacht, November 9, 1938, Sigmund Tobias and his parents fled their home in Germany and relocated to one of the few cities in the world that offered shelter without requiring a visa: the notorious pleasure capital, Shanghai. Seventeen thousand Jewish refugees flocked to Hongkew, a section of Shanghai ruled by the Japanese, and they created an active community that continued to exist through the end of the war.

In this exotic sanctuary, Sigmund Tobias grew from a six-year-old child to an adolescent. Tobias's coming-of-age story unfolds within his descriptions of Jewish life in Shanghai. Depleted by disease and hunger, constantly struggling with primitive and crowded conditions, the refugees faced shortages of food, clothing, and medicine. Tobias also observes the underlife of Shanghai: the prostitution and black market profiteering, the brutal lives of the Chinese workers, the tensions between Chinese and Japanese during the war, and the paralyzing inflation and the approach of the communist "liberators" afterward.

Richly detailed, Strange Haven opens a little-documented chapter of the Holocaust and provides a fascinating glimpse of life for these foreigners in a foreign land. An epilogue describes the changes Tobias observed when he returned to Shanghai forty years later as a visiting professor.

Sigmund Tobias, Distinguished Research Scientist, Institute for Urban and Minority Education, Teachers College, Columbia University, has contributed to many books and articles on educational psychology, instructional technology, and other aspects of learning and education.

"The history in this memoir is astonishing. . . . An affecting memoir of rescue and survival."--Booklist

"A remarkably accessible and detailed account of this vibrant community and the resilience of one family trying to create as normal and healthy a home as possible in dreadful conditions."--Zachor

"A moving story of both hardships (which intensified after Pearl Harbor) and friendships . . . . Tobias offers personal insight into the anxieties, dislocation, and cultural classes of the time."--Library Journal

“A fascinating, well-written story that involves aspects of Shanghai’s refugee youth experience not covered by any other such memoirs. It should appeal to a wide range of readers, from those interested in various aspects of the Holocaust, Jews in China, and adolescence and sexual awareness, especially within a very Jewish framework.”--David Kranzler, author of Japanese, Nazis, and Jews: The Jewish Refugee Community of Shanghai, 1938-45