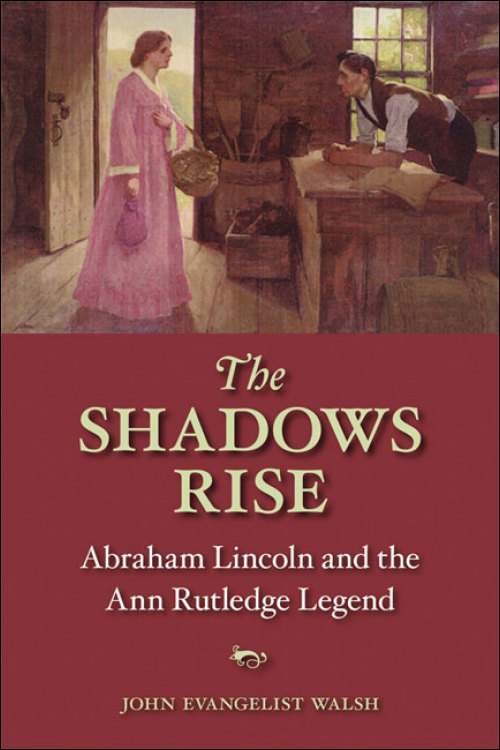 In recent decades the Ann Rutledge story has been treated as mythical rather than as an account of Abraham Lincoln's first but doomed love affair. In The Shadows Rise, the first book-length exploration of the subject, John Evangelist Walsh restores Ann Rutledge to her rightful place in the historical record.

In 1945 the noted Lincoln scholar James G. Randall stated in his Lincoln biography that no real evidence existed to confirm Lincoln's love for Ann or the tales of his profound grief at her early death. Later, in the 1990s, John Y. Simon and Douglas Wilson began the rehabilitation of Rutledge with a reexamination of Herndon's papers.

Now, in The Shadows Rise, Walsh transcends and transforms recent research, re-creating the Lincoln-Rutledge story in all its dramatic fullness and depth. Along with new material and new interpretations he supplies some old-fashioned common sense. Highlights include convincing reconstructions of Lincoln's New Salem friends and Walsh's fresh examination of the Mary Owens affair, in which Lincoln's offer of marriage was refused.

John Evangelist Walsh is the author of more than twenty books, including Moonlight: Abraham Lincoln and the Almanac Trial. The winner of an Edgar Award from the Mystery Writers of America for his book Poe the Detective, Walsh lives in Monroe, Wisconsin.

"Intelligent detective work that, at last, convincingly untangles the story of the young Lincoln's romance with Ann Rutledge."--Christian Science Monitor

"A provocative book . . . . The Shadows Rise belongs in any collection of books on Lincoln."--Civil War

"With exacting care and minute attention to detail, Walsh sifts the evidence . . . . Neither diminishing the importance of the event nor making it the central pivot of his life, Walsh places Lincoln's lost love in its appropriate context."--Georgia Historical Quarterly

"The most detailed study of the Abraham Lincoln-Ann Rutledge relationship yet written. Carefully researched and convincingly argued, it should set to rest once and for all the widespread misconception that Lincoln's first love affair was a myth or that the sudden death of Ann Rutledge was an incident of little importance in his early life."--Douglas L. Wilson, co-editor of Herdon's Informants: Letters, Interviews, and Statements about Abraham Lincoln