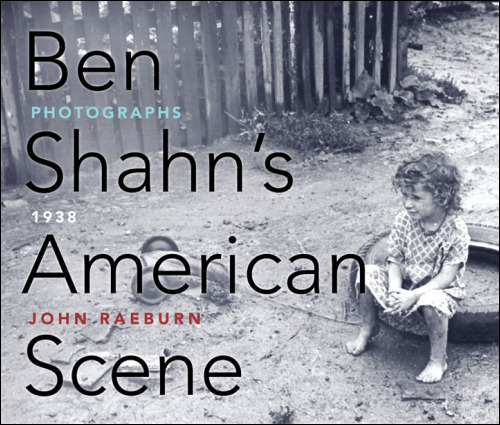 The paintings, murals, and graphics of Ben Shahn (1898–1969) have made him one of the most heralded American artists of the twentieth century, but during the 1930s he was also among the nation's premier photographers. Much of his photographic work was sponsored by the New Deal's Farm Security Administration, where his colleagues included Dorothea Lange and Walker Evans.

Ben Shahn's American Scene: Photographs, 1938 presents one hundred superb photographs from his most ambitious FSA project, a survey of small-town life in the Depression. John Raeburn's accompanying text illuminates the thematic and formal significance of individual photographs and reveals how, taken together, they address key cultural and political issues of the years leading up to World War II. Shahn's photographs highlight conflicts between traditional values and the newer ones introduced by modernity as represented by the movies, chain stores, and the tantalizing allure of consumer goods, and they are particularly rich in observation about the changes brought about by Americans' universal reliance on the automobile. They also explore the small town's standing as the nation's symbol of democratic community and expose the discriminatory social and racial practices that subverted this ideal in 1930s America.

John Raeburn is a professor of American studies and English at the University of Iowa. He is the author of, most recently, A Staggering Revolution: A Cultural History of Thirties Photography.

"The inherent truth in these deeply felt photographs is further proof of Ben Shahn's enduring relevance as an artist."--Forward

"Raeburn's close reading of the photographs and his analysis of what Shahn excluded offer a model for how historians can use photographs as primary documents."--Indiana Magazine of History

"With clarity and grace, John Raeburn analyzes Shahn's lesser-known work as a photographer and adds an important dimension to our understanding of 1930s photography and culture."--Miles Orvell, editor of John Vachon's America: Photographs and Letters from the Depression to World War II