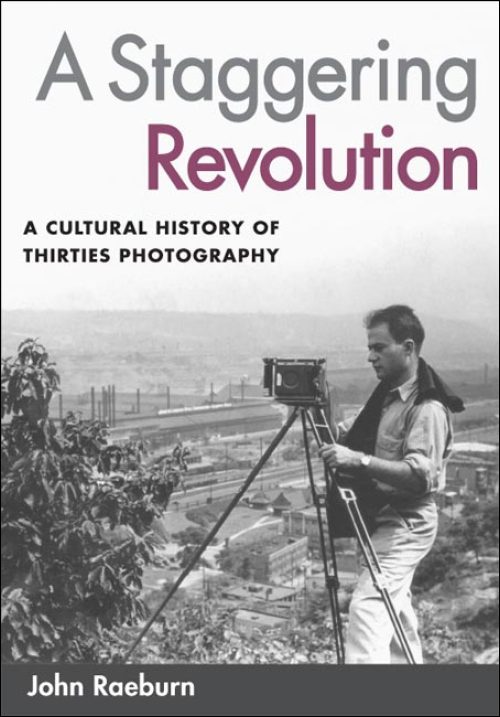 During the 1930s, the world of photography was unsettled, exciting, and boisterous. John Raeburn's A Staggering Revolution recreates the energy of the era by surveying photography's rich variety of innovation, exploring the aesthetic and cultural achievements of its leading figures, and mapping the paths their pictures blazed public's imagination.

While other studies of thirties photography have concentrated on the documentary work of the Farm Security Administration (FSA), no previous book has considered it alongside so many of the decade's other important photographic projects. A Staggering Revolution includes individual chapters on Edward Steichen's celebrity portraiture; Berenice Abbott's Changing New York project; the Photo League's ethnography of Harlem; and Edward Weston's western landscapes, made under the auspices of the first Guggenheim Fellowship awarded to a photographer. It also examines Margaret Bourke-White's industrial and documentary pictures, the collective undertakings by California's Group f.64, and the fashion magazine specialists, as well as the activities of the FSA and the Photo League.

John Raeburn is a professor of American studies and English at the University of Iowa. He is the author of Fame Became of Him: Hemingway as Public Writer and the editor (with Richard Glatzer) of Frank Capra: The Man and His Films.

"A brilliant sociological mapping of its subject that is nuanced, far-reaching and exhaustively researched"--The Art Book

A Staggering Revolution will create a renaissance in how scholars and students think about how photography arose as a democratic art form. Raeburn's insights regarding photography's revolution in the 1930s can also shed light on the current revolution in digital media."--H-Net Reviews

"Raeburn skillfully treats the role of the FSA photography project in the contexts of art. In the process he offers the most nuanced, perceptive discussion of the much-misunderstood role of FSA project chief Roy Emerson Stryker that I have ever read. Even for those of us well-schooled in the history and practices of the FSA, these chapters offer something new and valuable. . . . Raeburn challenges readers to look beyond received wisdom about the visual culture of the 1930s and explore it anew for themselves."--American Historical Review

"A sweeping cultural history of 1930s photography and a passionate argument that photographs are powerful pieces of historical evidence and should not be treated as merely illustrations."--Winterthur Portfolio

"A Staggering Revolution is a major work of synthesis and original scholarship, a close-textured history of photography in the Thirties that will change our way of thinking about its subject and about Thirties culture generally."--Miles Orvell, author of The Real Thing: Imitation and Authenticity in American Culture and of American Photography

"A landmark revision of our thinking about American photography in the 1930s. A large, meticulous, and passionate book."--William Stott, author of Documentary Expression and Thirties America and Walker Evans: Photographs from the 'Let Us Now Praise Famous Men' Project

"Tells an extraordinary story of the 'rebirth,' the flowering, and the cultural legitimation of photography in America, both as art and 'popular preoccupation,' in the 1930s. . . . A many-layered narrative, beautifully balanced and indescribably rich."--Alan Trachtenberg, Neil Gray Professor Emeritus of English and American Studies, Yale University