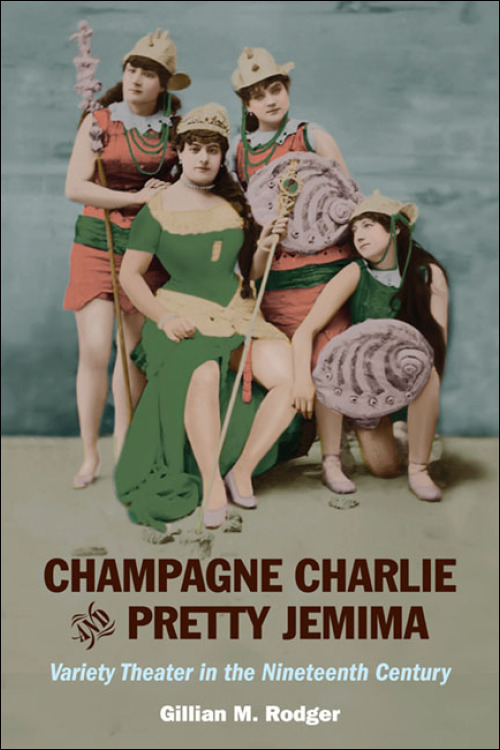 In this rich, imaginative survey of variety musical theater, Gillian M. Rodger masterfully chronicles the social history and class dynamics of the robust, nineteenth-century American theatrical phenomenon that gave way to twentieth-century entertainment forms such as vaudeville and comedy on radio and television. Fresh, bawdy, and unabashedly aimed at the working class, variety honed in on its audience's fascinations, emerging in the 1840s as a vehicle to accentuate class divisions and stoke curiosity about gender and sexuality. Cross-dressing acts were a regular feature of these entertainments, and Rodger profiles key male impersonators Annie Hindle and Ella Wesner while examining how both gender and sexuality gave shape to variety. By the last two decades of the nineteenth century, variety theater developed into a platform for ideas about race and whiteness.

As some in the working class moved up into the middle class, they took their affinity for variety with them, transforming and broadening middle-class values. Champagne Charlie and Pretty Jemima places the saloon keepers, managers, male impersonators, minstrels, acrobats, singers, and dancers of the variety era within economic and social contexts by examining the business models of variety shows and their primarily white, working-class urban audiences. Rodger traces the transformation of variety from sexualized entertainment to more family-friendly fare, a domestication that mirrored efforts to regulate the industry, as well as the adoption of aspects of middle-class culture and values by the shows' performers, managers, and consumers.

Gillian M. Rodger is an associate professor of musicology and ethnomusicology at the University of Wisconsin-Milwaukee.

"A comprehensive, nuanced analysis of the evolution of American variety performance in the 19th century. Highly recommended."--Choice

"An impressive book that should appeal to students and scholars of American business, cultural, and performance history and inspire additional research on this fascinating subject."--American Historical Review

"One of the most critically astute studies of another slighted aspect of American popular culture."--The Journal of American History

"An unparalleled resource and an enlightening and enjoyable read."--American Music

"Gillian M. Rodger has produced a clearly written and well-researched book that is wide enough in scope to be considered an indispensable source on the subject. . . . Traverses a swatch of popular culture which for too long has been talked about but rarely explored."--American Studies

"A pathbreaking contribution. This is the first in-depth, scholarly treatment of variety musical theater, and there is nothing comparable to it. Rodger follows sound scholarly methodology and is innovative in her pursuit of information from underutilized sources. No one interested in musical theater will be without it."--Dale Cockrell, author of Demons of Disorder: Early Blackface Minstrels and Their World