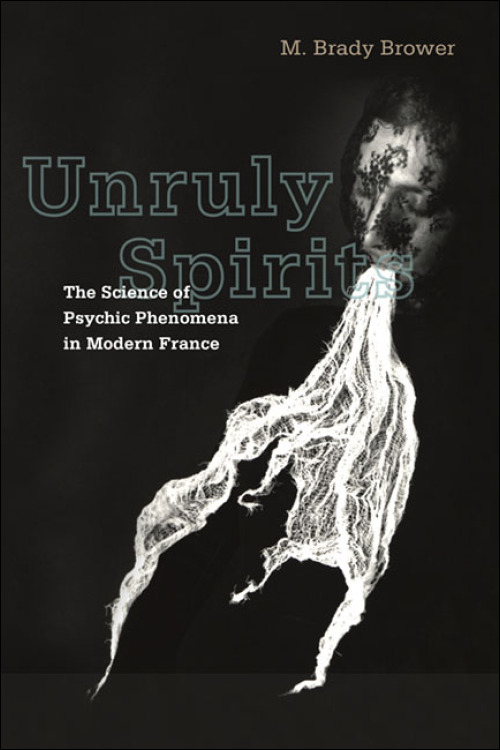 Unruly Spirits connects the study of séances, telepathy, telekinesis, materializations, and other parapsychic phenomena in France during the age of Sigmund Freud to an epistemological crisis that would eventually yield the French adoption of psychoanalysis. Skillfully navigating experiments conducted by nineteenth-century French psychical researchers and the wide-ranging debates that surrounded their work, M. Brady Brower situates the institutional development of psychical research at the intersection of popular faith and the emergent discipline of psychology.

Brower shows how spiritualist mediums were ignored by French academic scientists for nearly three decades. Only after the ideologues of the Third Republic turned to science to address what they took to be the excess of popular democracy would the marvels of mediumism begin to emerge as legitimate objects of scientific inquiry. Taken up by the most prominent physicists, physiologists, and psychologists of the last decades of the nineteenth century, psychical research would eventually stall in the 1920s as researchers struggled to come to terms with interpersonal phenomena (such as trust and good faith) that could not be measured within the framework of their experimental methods.

In characterizing psychical research as something other than a mere echo of popular spirituality or an anomaly among the sciences, Brower argues that the questions surrounding mediums served to sustain the scientific project by forestalling the establishment of a closed and complete system of knowledge. By acknowledging persistent doubt about the intentions of its participants, psychical research would result in the realization of a subjectivity that was essentially indeterminate and would thus clear the way for the French reception of psychoanalysis and the Freudian unconscious and its more comprehensive account of subjective uncertainty.

M. Brady Brower is an assistant professor of history at Weber State University.

"Essential reading for those interested in the history of either psychology or the border sciences."--Journal of the History of the Behavioral Sciences

"Brower's book analyzes deftly the history of this troubled transition from a 'philosophy of the mind to a science of the mind in modern France.'"--Bulletin of the History of Medicine

"M. Brady Brower clearly demonstrates the importance of the French strain of psychical research and shows it to be a crucial and unjustly neglected episode in the story of modern psychology. What he has uncovered should provoke a searching revision of the standard account of the resistance psychoanalysis faced in fin-de-siècle and interwar France."--John Warne Monroe, author of Laboratories of Faith: Mesmerism, Spiritism, and Occultism in Modern France