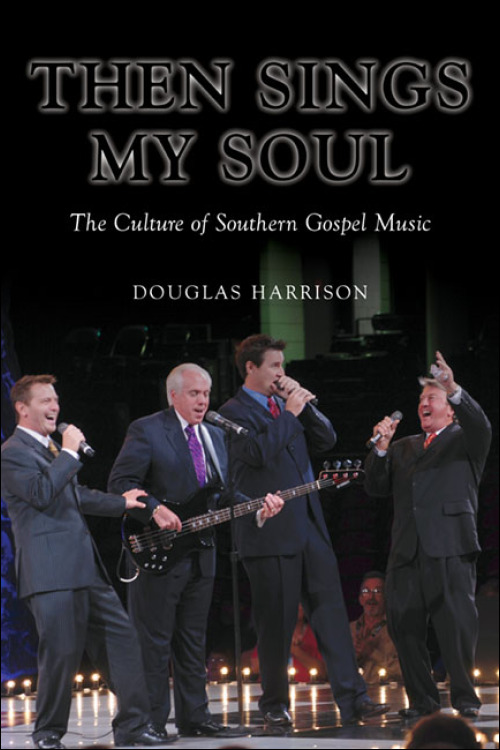 In this ambitious book on southern gospel music, Douglas Harrison reexamines the music's historical emergence and its function as a modern cultural phenomenon. Rather than seeing the music as a single rhetoric focusing on the afterlife as compensation for worldly sacrifice, Harrison presents southern gospel as a network of interconnected messages that evangelical Christians use to make individual sense of both Protestant theological doctrines and their own lived experiences. Harrison explores how listeners and consumers of southern gospel integrate its lyrics and music into their own religious experience, building up individual--and potentially subversive--meanings beneath a surface of evangelical consensus.

Reassessing the contributions of such figures as Aldine Kieffer, James D. Vaughan, and Bill and Gloria Gaither, Then Sings My Soul traces an alternative history of southern gospel in the twentieth century, one that emphasizes the music's interaction with broader shifts in American life beyond the narrow confines of southern gospel's borders. Harrison's discussion includes the "gay-gospel paradox"--the experience of non-heterosexuals in gospel music--as emblematic of fundamentalism's conflict with the postmodern world.

Douglas Harrison is an associate professor of English at Florida Gulf Coast University.

"A powerful and effective sample of self-reflexive scholarship."--Southern Spaces

"Resists facile caricature and simplistic interpretation of a musical tradition which, although it has demonstrated global appeal, remains linked to rural white Southern fundamentalism. . . . Harrison's book complicates our sense of who 'we' are and where that 'beautiful shore' may be . He makes us believe that even within fundamentalist evangelicalism, these borders are not nearly so fixed as we might have supposed."--Religion Dispatches

"Both the most important book about American vernacular music in a generation and a revelatory addition to our rich literature about the lived experience of American evangelicalism. Harrison shows how a fundamentalist evangelical culture can foster individualized moments of wonder-working transcendence that move beneath, around, and through the trappings of power and conformity."--The Journal of Southern History

"A thoughtful and provocative monograph that addresses lacunae in ethnographic research on southern evangelical culture, religion, and music by delineating the important historical roles played by composer/publisher Aldine S. Kieffer (and his partner Ephraim Ruebush), and by songwriter/performer Bill Gaither (and his wife Gloria)."--Journal of Folklore Research

"Harrison's work suggests that autobiographical approaches to popular culture have the potential to resonate far beyond a solitary author. It suggests that there might be a whole lot more to the music than has previously been considered."--Register of the Kentucky Historical Society

"A significant contribution to understanding southern white gospel music and evangelical religious practice. Harrison treats seriously a music that has long been dismissed and neglected as simplistic and is thus vastly understudied."--Jeff Todd Titon, author of Powerhouse for God: Speech, Chant, and Song in an Appalachian Baptist Church

"A compelling and eloquent first book-length critical analysis of the music and social context of modern southern gospel. Truly one couldn't conjure up a scholar better equipped to write on this topic, which Harrison addresses with notable authority and ambition."--David W. Stowe, author of No Sympathy for the Devil: Christian Pop Music and the Transformation of American Evangelicalism