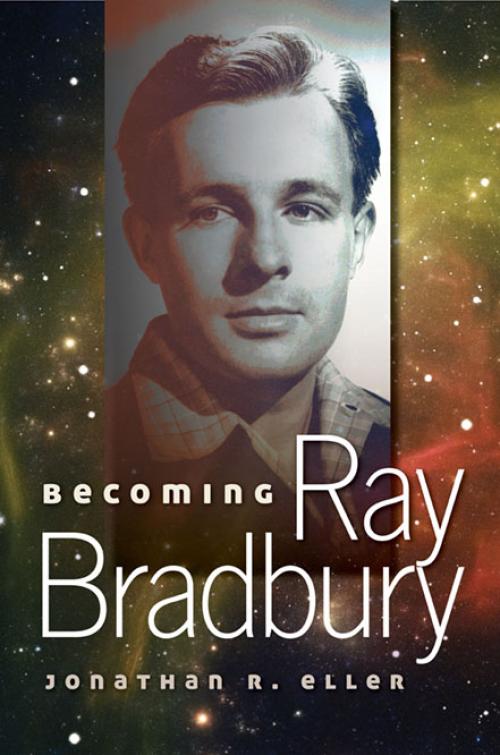 Becoming Ray Bradbury chronicles the making of an iconic American writer by exploring Ray Bradbury's childhood and early years of his long life in fiction, film, television, radio, and theater. Jonathan R. Eller measures the impact of the authors, artists, illustrators, and filmmakers who stimulated Bradbury's imagination throughout his first three decades. Unprecedented access to Bradbury's personal papers and other private collections provides insight into his emerging talent through his unpublished correspondence, his rare but often insightful notes on writing, and his interactions with those who mentored him during those early years.

Beginning with his childhood in Waukegan, Illinois, and Los Angeles, this biography follows Bradbury's development from avid reader to maturing author, making a living writing for the genre pulps and mainstream magazines. Eller illuminates the sources of Bradbury's growing interest in the human mind, the human condition, and the ambiguities of life and death--themes that became increasingly apparent in his early fiction. Bradbury's correspondence documents his frustrating encounters with the major trade publishing houses and his earliest unpublished reflections on the nature of authorship. Eller traces the sources of Bradbury's very conscious decisions, following the sudden success of The Martian Chronicles and The Illustrated Man, to voice controversial political statements in his fiction. Eller also elucidates the complex creative motivations that yielded Fahrenheit 451.

Becoming Ray Bradbury reveals Bradbury's emotional world as it matured through his explorations of cinema and art, his interactions with agents and editors, his reading discoveries, and the invaluable reading suggestions of older writers. These largely unexplored elements of his life pave the way to a deeper understanding of his more public achievements, providing a biography of the mind, the story of Bradbury's self-education and the emerging sense of authorship at the heart of his boundless creativity.

Jonathan R. Eller is a Chancellor's Professor of English, Emeritus, at Indiana University-Purdue University in Indianapolis and cofounder of the Center for Ray Bradbury Studies at IUPUI, where he served for ten years as the Bradbury Center’s director. His books Becoming Ray Bradbury and Ray Bradbury Unbound were each finalists for the Locus Award in the Nonfiction category.

"Every page is packed with fascinating material about one of this country’s most beloved writers."--Michael Dirda, Washington Post

"Eller shows how Bradbury found his vocation in a private world of mimeographed fanzines and couch-surfing, of transcontinental trips to the very first SF conventions, of the intense rivalries and controversies of a small enclosed world. . . . Eller’s excellent account makes clear that one of the reasons why Bradbury came to seem an important new voice is that he was never as naive a writer as literary patrons such as Christopher Isherwood and Aldous Huxley may have assumed."--Times Literary Supplement

"Eller must surely be the preeminent biographer of Ray Bradbury."--Choice

"In great and always fascinating detail, Eller chronicles the journey Bradbury took from his youth to his early middle years. . . . [A] fine and important book."--Neworld Review

"A treasury of otherwise unavailable information. . . . Fans of Bradbury will find this book a fascinating and revealing look into his life and work."--Science Fiction Studies

"As perhaps the most knowledgeable scholar of Bradbury's body of work, Eller offers an in-depth study of his subject's early life, laying out his development from pulp publications toward The Martian Chronicles (1950) and Fahrenheit 451 (1953). . . . A fitting tribute to the impact that Ray Bradbury has had for his readers. Becoming Ray Bradbury reminds fans and scholars alike of the need to revisit our well-worn copies of The Martian Chronicles, Fahrenheit 451 and the countless short stores that introduced so many of us to the realm of the fantastic."--Journal of the Fantastic in the Arts

"A stunningly good examination of what in Ray's life turned him into the unique, individual writer he became."--Huffington Post

"A richly contextualized interpretation of Ray Bradbury's personal experience, his intellectual and artistic life, and the cultural milieu in which his gifts developed. Becoming Ray Bradbury will be the definitive account of Bradbury's development as a writer."--David Mogen, author of Wilderness Visions: The Western Theme in Science Fiction Literature

"Articulate and engaging, astonishingly rich in detail, and demonstrating exemplary research and scholarship, Becoming Ray Bradbury will be regarded as the most authoritative biography of Bradbury's life and work for many years."--Peter Stockwell, author of Texture: A Cognitive Aesthetics of Reading