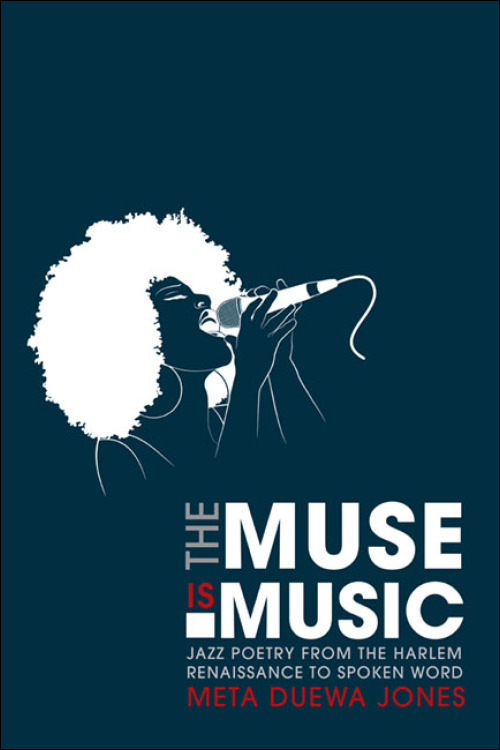 The Muse Is Music

This wide-ranging, ambitiously interdisciplinary study traces jazz's influence on African American poetry from the Harlem Renaissance to contemporary spoken word poetry. Examining established poets such as Langston Hughes, Ntozake Shange, and Nathaniel Mackey as well as a generation of up-and-coming contemporary writers and performers, Meta DuEwa Jones highlights the intersections of race, gender, and sexuality within the jazz tradition and its representation in poetry. Applying prosodic analysis to emphasize the musicality of African American poetic performance, she examines the gendered meanings evident in collaborative performances and in the criticism, images, and sounds circulating within jazz cultures.

Jones also considers poets who participated in contemporary venues for black writing such as the Dark Room Collective and the Cave Canem Foundation, including Harryette Mullen, Elizabeth Alexander, and Carl Phillips. Incorporating a finely honed discussion of the Black Arts Movement, the poetry-jazz fusion of the late 1950s, and slam and spoken word performance milieus such as Def Poetry Jam, she focuses on jazz and hip hop-influenced performance artists including Tracie Morris, Saul Williams, and Jessica Care Moore.

Through attention to cadence, rhythm, and structure, The Muse Is Music fills a gap in literary scholarship by attending to issues of gender in jazz and poetry and by analyzing recordings of poets both with and without musical accompaniment. Applying the methodology of textual close reading to a critical "close listening" of American poetry's resonant soundscape, Jones's analyses include exploring the formal innovation and queer performance of Langston Hughes's recorded collaboration with jazz musicians, delineating the relationship between punctuation and performance in the post-soul John Coltrane poem, and closely examining jazz improvisation and hip-hop stylization. An elaborate articulation of the connections between jazz, poetry and spoken word, and gender, The Muse Is Music offers valuable criticism of specific texts and performances and a convincing argument about the shape of jazz and African American poetic performance in the contemporary era.

"An important addition to the growing literature about jazz poetry. Recommended."--Choice

“Meta DeEwa Jones's recent tour de force of contemporary criticism, The Muse is Music, most certainly must take its place among classic and recent critical studies of African-American poetry and, as Jones describes her topic, ‘jazz resonant’ writing.”—The Black Scholar

"Highly original. . . . Jones's authoritative knowledge and passion for jazz and for poetry infuse this book, and allow her to move with sweeping range through nearly a century of African American poetic production."--Wasafiri

"Like Melba Liston stepping to the microphone, trombone in hand, to punctuate one of her own arrangements with a newly improvised statement, Meta DuEwa Jones takes up the changes in the interrelationship between jazz and poetry and turns them out. Even those few readers who have read everything in print on the subject of jazz and verse will find that Jones has both new chapters and new verses, well worth multiple hearings."--Aldon Lynn Nielsen, author of Integral Music: Languages of African-American Innovation

"An extraordinarily original and important book about the musicality of African American poetic performance. Meta DuEwa Jones offers insightful and sophisticated readings and analyses of the relationship between black poetry and jazz. This wide-ranging and ambitious book will make an immediate impact on African American literary and cultural studies as well as performance studies."--Farah Jasmine Griffin, coauthor of Clawing at the Limits of Cool: Miles Davis, John Coltrane, and the Greatest Jazz Collaboration Ever

Received an Honorable Mention in the competition for the William Sanders Scarborough Prize from the Modern Language Association (MLA), 2012