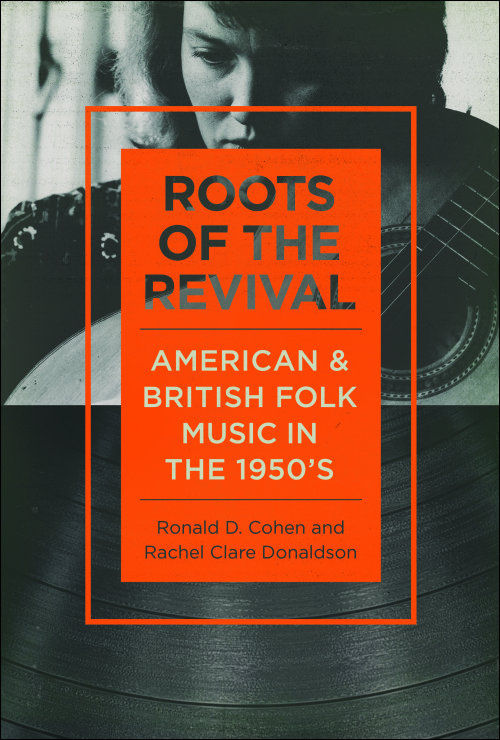 In Roots of the Revival: American and British Folk Music in the 1950s, Ronald D. Cohen and Rachel Clare Donaldson present a transatlantic history of folk's midcentury resurgence that juxtaposes the related but distinct revivals that took place in the United States and Great Britain.

After setting the stage with the work of music collectors in the nineteenth century, the authors explore the so-called recovery of folk music practices and performers by Alan Lomax and others, including journeys to and within the British Isles that allowed artists and folk music advocates to absorb native forms and facilitate the music's transatlantic exchange. Cohen and Donaldson place the musical and cultural connections of the twin revivals within the decade's social and musical milieu and grapple with the performers' leftist political agendas and artistic challenges, including the fierce debates over "authenticity" in practice and repertoire that erupted when artists like Harry Belafonte and the Kingston Trio carried folk into the popular music mainstream.

From mountain ballets to skiffle, from the Weavers in Greenwich Village to Burl Ives on the BBC, Roots of the Revival offers a frank and wide-ranging consideration of a time, a movement, and a transformative period in American and British pop culture.

* Publication of this book was supported by a grant from the L. J. and Mary C. Skaggs Folklore Fund

Ronald D. Cohen is professor emeritus of history at Indiana University Northwest and the author of Rainbow Quest: The Folk Music Revival and American Society, 1940-1970. Rachel Clare Donaldson is the author of I Hear America Singing: National Identity and Folk Music.

“The hugely engaging tome focuses its attention primarily on 1950 to 1958 or what you can think of as the period between the blacklisting of the Weavers and the rise of the Kingston Trio. . . . What Cohen and Donaldson’s book does so effectively is it maps the development chronologically, so it’s easy to see how we got from the Weavers to skiffle via the ‘Rock Island Line’ and finally to Bob Dylan in Greenwich Village. . . . Roots of the Revival is accessible and, for anyone with even a passing interest in folk music, absolutely fascinating.”— Shire Folk

"Much has been written about the folk revival, but this book is unusual in examining its progression in both the US and Britain. Folk-music fans might be unaware that there was strong interest in American and British folk music before the highly publicized revival, and Cohen and Donaldson have done that important research. Highly Recommended."--Choice

"Roots of the Revival is an indispensable text for scholars interested in the relationship between 'folk' and 'pop' at midcentury. It is more than simply a prehistory of 1960s folk activities, instead demonstrating how musicians, folklorists, and audiences navigated the concerns and events particular to the decade."--Notes

"A detailed account of the revival's factual history and many revealing anecdotes about its participants. . . . Roots of the Revival is a significant addition to the scholarship on the 1950s folk music revival."--Journal of Folklore Research

"Although there are other books and memoirs about the American folk revival, and some treatment of the revival in England, no one has thought to compare and analyze both of them together."--Richard Weissman, author of Talkin' 'Bout a Revolution: Music and Social Change in America