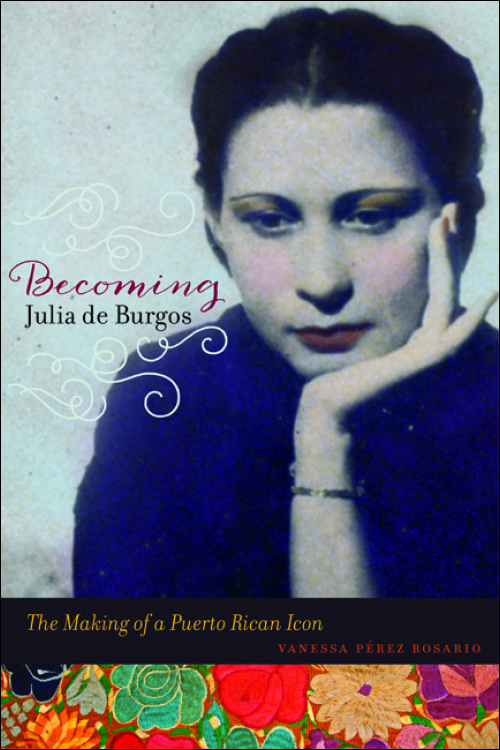 While it is rare for a poet to become a cultural icon, Julia de Burgos has evoked feelings of bonding and identification in Puerto Ricans and Latinos in the United States for over half a century.

In the first book-length study written in English, Vanessa Pérez-Rosario examines poet and political activist Julia de Burgos's development as a writer, her experience of migration, and her legacy in New York City, the poet's home after 1940. Pérez-Rosario situates Julia de Burgos as part of a transitional generation that helps bridge the historical divide between Puerto Rican nationalist writers of the 1930s and the Nuyorican writers of the 1970s. Becoming Julia de Burgos departs from the prevailing emphasis on the poet and intellectual as a nationalist writer to focus on her contributions to New York Latino/a literary and visual culture. It moves beyond the standard tragedy-centered narratives of Burgos's life to place her within a nuanced historical understanding of Puerto Rico's peoples and culture to consider more carefully the complex history of the island and the diaspora. Pérez-Rosario unravels the cultural and political dynamics at work when contemporary Latina/o writers and artists in New York revise, reinvent, and riff off of Julia de Burgos as they imagine new possibilities for themselves and their communities.

Vanessa Pérez-Rosario is a professor in the Department of English at Queens College, City University of New York. She is the editor of Hispanic Caribbean Literature of Migration: Narratives of Displacement and translator of Mayra Santos-Febres’ Boat People.

"An eye-opening study on a poet and political activist in the ranks of Gabriela Mistral and Luisa Capetillo, this is a must-have for Latin American, Puerto Rican, women’s, and Caribbean studies collections."--Library Journal

"A phenomenal work by a remarkable scholar, this absorbing volume is required reading for those intrigued by the relationship between Latin America and the US. Highly recommended."--Choice

"Perez-Rosario interrupts the dominant narrative of Latina tragedy, showing us instead a resilient Julia de Burgos who struggled against gender discrimination, poverty, and racism. . . . Perez-Rosario's rewriting of Burgos as Latina highlights the poet's fight for self-determination and recognition, autobiographical writing style, and political commitment to decolonization and social justice."--Women's Review of Books

"Reading Burgos under a different light, Perez-Rosario extends her analysis to how Burgos was/is received by other Latin American writers and artists in the United States and the Caribbean. The 'becoming' of the title unfurls. . . . It indicates a process, movement, the nomadic essence in Burgos' writing that Perez-Rosario deftly traces."--SX Salon

"In this magisterial study Pérez-Rosario brings to blazing life one of the most courageous and important Puerto Rican diasporic artists of the 20th century. An indispensable book that presents Julia de Burgos in her extraordinary plenitude."--Junot Díaz

"On Pérez-Rosario's brilliant reconstruction, Julia de Burgos recovers the thrill and the sting of her own legacy. She also glows with the flashes of brilliance her work ignited in Latin American artists who found her, and themselves through her, in the de-territorialized nowhere or utopia of New York. From that same fraught city, where heritage identities and trajectories become burdens akin to the Holy Grail, this book brings a major poet and activist into focus as incitement to read more and to write bravely."--Doris Sommer, author of The Work of Art in the World: Civic Agency and Public Humanities

"Becoming Julia de Burgos is a smart and original study of this important poet and cultural figure. Vanessa Pérez-Rosario is an astute and insightful reader of Burgos' poetry, letters and journalism. Pérez-Rosario is also a talented cultural historian: in addition to readings that yield political and aesthetic dimensions of Burgos' writing, Pérez-Rosario also contextualizes Burgos' life transnationally, placing her at the center of debates among Puerto Rican intellectuals about gender, colonialism and cultural identity. An important study from an exciting and talented new critical voice."--Farah Jasmine Griffin, author of Harlem Nocturne: Women Artists and Progressive Politics During World War II

"In this beautifully written and thoroughly researched study, one of the most important artistic and literary icons of the Nuyorican and Latino diaspora finally gets her due. Vanessa Pérez-Rosario gives us the most current and definitive resource to understand not only Julia de Burgos' extensive body of work, but also the expansive cultural movement that continues to find inspiration in her legacy."--Arlene Dávila, author of Culture Works: Space, Value and Mobility across the Neoliberal Americas

"Becoming Julia de Burgos makes a truly significant contribution to multiple fields as it demonstrates that commitment and attention to local histories and locations, set into larger contexts, which marks the best work in Puerto Rican and Caribbean Studies."--Elizabeth Rosa Horan, co-editor of This America of Ours: The Letters of Gabriela Mistral and Victoria Ocampo