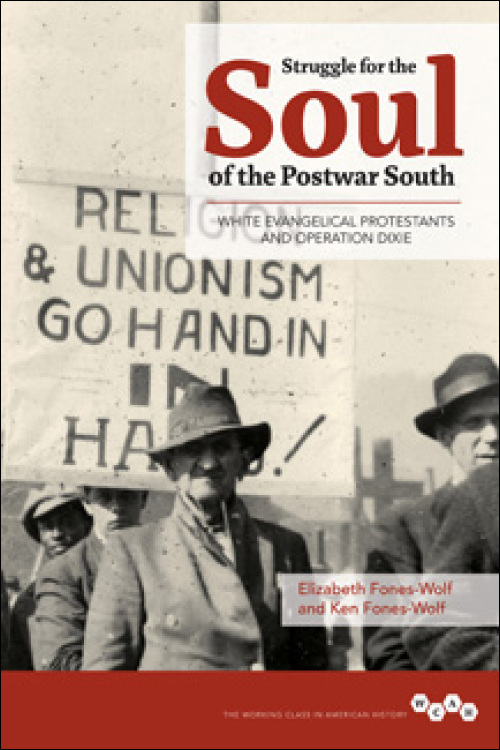 In 1946, the Congress of Industrial Organizations (CIO) undertook Operation Dixie, an initiative to recruit industrial workers in the American South. Elizabeth and Ken Fones-Wolf plumb rarely used archival sources and rich oral histories to explore the CIO's fraught encounter with the evangelical Protestantism and religious culture of southern whites.

The authors' nuanced look at working-class religion reveals how laborers across the surprisingly wide evangelical spectrum interpreted their lives through their faith. Factors like conscience, community need, and lived experience led individual preachers to become union activists and mill villagers to defy the foreman and minister alike to listen to organizers. As the authors show, however, all sides enlisted belief in the battle. In the end, the inability of northern organizers to overcome the suspicion with which many evangelicals viewed modernity played a key role in Operation Dixie's failure, with repercussions for labor and liberalism that are still being felt today.

Identifying the role of the sacred in the struggle for southern economic justice, and placing class as a central aspect in southern religion, Struggle for the Soul of the Postwar South provides new understandings of how whites in the region wrestled with the options available to them during a crucial period of change and possibility.

"A stunning social history of working-class southerners in the postwar South. . . . Highly recommended."--Choice

"Struggle for the Soul of the Postwar South, is a brilliant addition to this increasingly robust body of scholarship. . . . The Fones-Wolfs' book will be of obvious interest to labor and religious historians, but it also deserves al a wide audience among the "new" historians of capitalism."--The Journal of Southern Religion

"Elizabeth and Ken Fones-Wolf provide an outstanding account of the role of religion in the Congress of Industrial Organization's (CIO) campaign to organize industrial workers in the South after World War II. . . . By weaving together the strands of American labor and religious history, the Fones-Wolfs have done the signal service of requiring students of both to take them up."--American Historical Review

"Elizabeth and Ken Fones-Wolf have written an engaging book that explores the post-World War II labour movement in the US south through the lens of religious culture. . . . A major intervention in southern and labour history, this book promises to influence how historians understand and analyze the intersections of religion and class in social justice movements and in the lives of working people."--Labour/Le Travail

"Elizabeth Fones-Wolf and Ken Fones-Wolf have written a nuanced, well-argued monograph on the role of religion in Operation Dixie, the attempt by the Congress of Industrial Organization (CIO) to organize southern workers after World War II. . . . an illuminating study for a variety of historians."--Journal of American History

"Grounded in a wealth of archival sources, ranging from oral and local histories to the records of churches and unions, the Fones-Wolfs' multifaceted text is a brilliant and timely intervention in the scholarship, and a pleasure to read."-- Register of the Kentucky Historical Society

"The Fones-Wolfs' masterful analysis is essential reading for understanding the dynamics of these conflicts."--North Carolina Historical Review

"Struggle for the Soul of the Postwar South is a unique take on an all-too-familiar story."--Journal of Religion

"Elizabeth and Ken Fones-Wolf have produced the best book yet written on southern religious culture and its fateful intersection with the American labor movement during the crucial years when the twentieth-century fate of organized labor hung in the balance. This book is a treasure."--Joseph A. McCartin, author of Collision Course: Ronald Reagan, the Air Traffic Controllers, and the Strike that Changed America

"A landmark study. The authors use this insightful and often surprising history to shed new light on the failure of Operation Dixie between 1946 and 1953. In doing so, they deepen our understanding of the relationship between evangelical Christianity and southern labor history, as well as between religion and working-class conservatism, race relations, and anti-unionism."--Jarod Roll, author of Spirit of Rebellion: Labor and Religion in the New Cotton South

"The authors have accomplished the rare feat of gracefully combining labor, social, and religious history into a seamless whole, and in the process explaining a story and a tragedy has cried out for such an explanation. This will be essential reading for those interested in southern, labor, and American religious history, and for those who want to think hard about how religious traditions interact with movements for social justice."--Paul Harvey, co-author of The Color of Christ: The Son of God and the Saga of Race in America