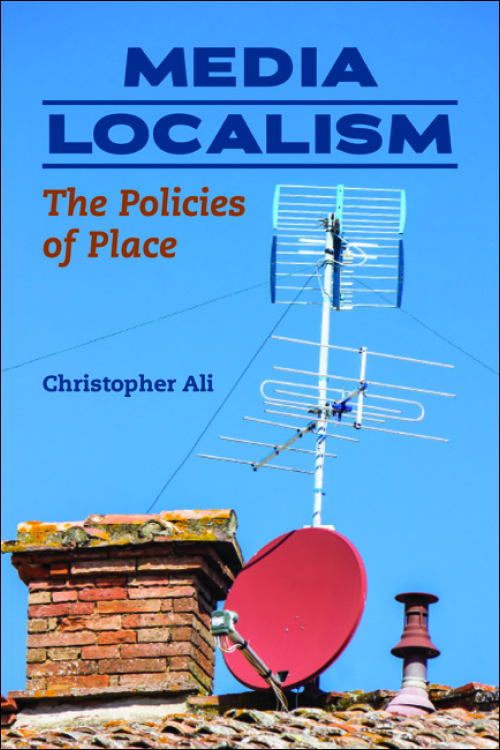 We live in a boosterish era that exhorts us to play local and buy local. But what does it mean to support local media? How should we define local media in the first place?

Christopher Ali delves into our ideas about localism and their far-reaching repercussions for the discourse of federal media policy and regulation. His critique focuses on the new interest in localism among regulators in the United States, the United Kingdom, and Canada. As he shows, the many different and often contradictory meanings of localism complicate efforts to study local voices. At the same time, market factors and regulators' unwillingness to critically examine local media blunt challenges to the status quo. Ali argues that reconciling the places where we live with the spaces we inhabit will point regulators toward effective policies that strengthens local media. That new approach will again elevate local media to its rightful place as a vital part of the public good.

Christopher Ali is an assistant professor in the Department of Media Studies at the University of Virginia. He is a coauthor of Echoes of Gabriel Tarde: What We Know Better or Different 100 Years Later.

"Energetically written. . . . Crucial topics for understanding what is actually going on behind the scenes of your local nightly news."--Sante Fe New Mexican

"Shines a needed light on the threats that local broadcasters are currently facing. . . . The conversation about media localism is an important one, and this book raises critical questions and posits thought-provoking ideas for a path forward."--Journalism and Mass Communication Quarterly

"The book is well researched. . . . The conversation about media localism is an important one, and this book raises critical questions and posits thought-provoking ideas for a new path forward."--American Journalism

"It is the detail in Ali's analysis that is impressive. There is much value in it as just a history of media policy-making at the beginning of the 21st century, as Ali looks at key moments in regulatory processes in each of the territories he covers."--Journalism

"Media's woeful lack of localism is matched by lack of definition about what the term really means. Ali's brilliant dissection of localism in the United States, the United Kingdom, and Canada provides a foundation for developing strategies to restore our vanished local media."--Michael Copps, former Commissioner of the U.S. Federal Communications Commission

"This landmark book offers a fascinating and invaluable analysis for anyone seeking a critical understanding of 'the local' in our digital age. With elegance and clarity, Ali draws from comparative case studies and key historical contexts to show why democracy still requires media localism--and why an unfettered market can't support it. This is a must-read for policymakers, journalists, and concerned citizens everywhere."--Victor Pickard, author of America's Battle for Media Democracy: The Triumph of Corporate Libertarianism and the Future of Media Reform

"Bold and innovative. A scholarly interrogation of significant moves to think through the meaning of community and how various policymakers, politicians, activists, and indeed entrepreneurs have sought to mobilize these concerns."--Des Freedman, author of The Contradictions of Media Power