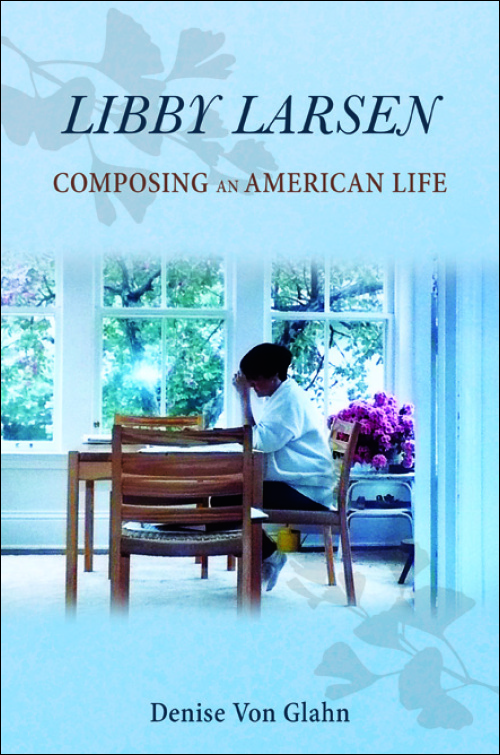 Libby Larsen has composed award-winning music performed around the world. Her works range from chamber pieces and song cycles to operas to large-scale works for orchestra and chorus. At the same time, she has advocated for living composers and new music since cofounding the American Composers Forum in 1973.

Denise Von Glahn’s in-depth examination of Larsen merges traditional biography with a daring scholarly foray: an ethnography of one active artist. Drawing on musical analysis, the composer’s personal archive, and seven years of interviews with Larsen and those in her orbit, Von Glahn illuminates the polyphony of achievements that make up Larsen’s public and private lives. In considering Larsen’s musical impact, Von Glahn delves into how elements of the personal—a 1950s childhood, spiritual seeking, love of nature, and status as an “important woman artist”—inform her work. The result is a portrait of a musical pathfinder who continues to defy expectations and reject labels.

* Publication supported by grants from the Dragan Plamenac Endowment of the American Musicological Society, funded in part by the National Endowment for the Humanities and the Andrew W. Mellon Foundation; The Florida State University, Office of Research; The Florida State University, College of Music; and the Henry and Edna Binkele Classical Music Fund.

Denise Von Glahn is the Curtis Mayes Orpheus Professor of Musicology at Florida State University, where she is also the coordinator of the Musicology Area and director of the Center for Music of the Americas. She has written three previous books: The Sounds of Place: Music and the American Cultural Landscape, which won an ASCAP-Deems Taylor Award in 2004; Leo Ornstein: Modernist Dilemmas, Personal Choices, coauthored with Michael Broyles, which won the Irving S. Lowens Award in 2009; and Music and the Skillful Listener: American Women Compose the Natural World, which won the Pauline Alderman Award in 2015.

"Libby Larsen: Composing an American Life is a welcome addition to the growing number of biographies about women composers." --NOTES

"Recommended for anyone who wishes to study the fascinating life of Larsen, her compositions, and her presence in American compositional life." --Choral Journal

"Undoubtedly, Von Glahn's scholarship and the insight with which she has framed her research are immensely valuable, and as a first biography of the master composer, her book holds even more significance. Anyone, musical or not, who wants to learn about Libby Larsen should read Von Glahn's well-researched and thorough portrayal of her subject." --Women and Music

“Excellently researched, beautifully organized, and entertainingly written. Presents a sensitive, wonderfully collaborative portrait of an ‘exuberant,’ highly productive, and driven woman who dealt with all the turbulence, social change, and musical vicissitudes of her social and musical worlds.”--Ellen Koskoff, author of A Feminist Ethnomusicology: Writings on Music and Gender

“A scholarly contribution of great importance. Fills in some of the gaps of a leading female composer of our time. Von Glahn’s ‘collaboration’ with Libby Larsen is surely a positive factor in ensuring an unprecedented level of detail.”--Kay Kaufman Shelemay, author of Soundscapes: Exploring Music in a Changing World