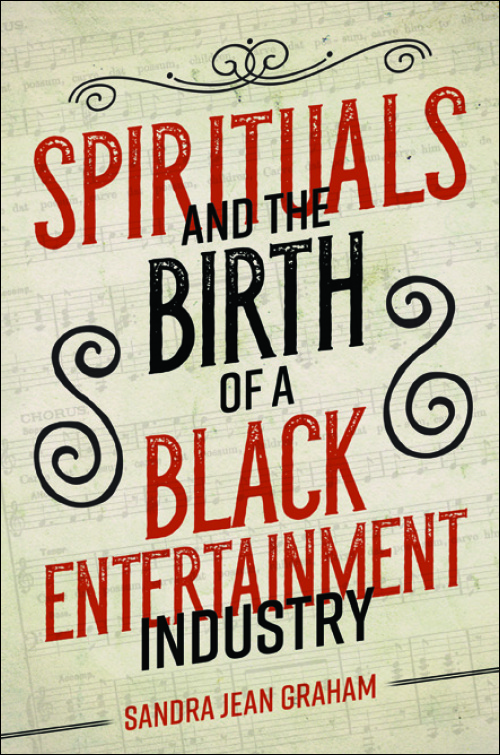 Spirituals performed by jubilee troupes became a sensation in post–Civil War America. First brought to the stage by choral ensembles like the Fisk Jubilee Singers, spirituals anchored a wide range of late nineteenth-century entertainments, including minstrelsy, variety, and plays by both black and white companies.

In the first book-length treatment of postbellum spirituals in theatrical entertainments, Sandra Jean Graham mines a trove of resources to chart the spiritual’s journey from the private lives of slaves to the concert stage. Graham navigates the conflicting agendas of those who, in adapting spirituals for their own ends, sold conceptions of racial identity to their patrons. In so doing they laid the foundation for a black entertainment industry whose artistic, financial, and cultural practices extended into the twentieth century.CUSTOM_DIV

* Publication of this book is supported by the AMS 75 PAYS Endowment of the American Musicological Society, funded in part by the National Endowment for the Humanities and the Andrew W. Mellon Foundation; by the Babson Faculty Research Fund; and by a grant from the H. Earle Johnson Fund of the Society for American Music.

Sandra Jean Graham is an associate professor of music at Babson College.

"A pleasure to read, the book weaves meticulous research into an engaging narrative that vividly enriches understanding of postbellum American music and theater. Highly recommended." --Choice

"[A] one-of-a-kind title . . . Many volumes address spirituals themselves, but few detail the actual exponents of this important African American tradition in such a refreshingly disarming way."--Library Journal

"This book is recommended to anyone with an interest in American folk and popular music, and it should provoke many followers-up studies that explore its themes in even greater depth as well as their extensions into the twentieth century." --Journal of Folklore Research

"Music historians will find Spirituals and the Birth of a Black Entertainment Industry fascinating because instead of rehashing the already well-researched lyric import of the spirituals, Graham looks at the art form as the spark that ignited an entertainment industry." --ARSC Journal

"A detailed and valuable genealogy of the spiritual." --The Journal of Southern History

"Graham proves an industry was built on and inspired by the specific cultural context and contributions of Black people. . . . Spirituals and the Birth of a Black Entertainment Industry is compulsory reading for all who wish to expand their knowledge on Black contributions to music, art, and entertainment." --Transposition

"A detailed, cogent, and fascinating history of the popularization of Negro spirituals [that is] thoroughly documented and covers a truly vast range of information. One of the especially distinctive features of Graham's approach is its careful consideration of musical elements and how they figure in defining objects under study."--Thomas L. Riis, author of Frank Loesser

Web Recording 4.2. Excerpt from "Great Camp Meeting" as recorded by the Southland Jubilee Singers in 1921. The repeat of the opening chorus has been omitted for this example. From Earliest Negro Vocal Groups, vol. 4, 1921–1924 (Vienna: Document Records DOCD-5531).

Sandra Jean Graham is an associate professor of music at Babson College. Her articles on spirituals and blackface minstrelsy have been published in American Music, the New Grove Dictionary of American Music (2nd ed), and The Oxford Handbook of Music Censorship (Oxford, 2014).